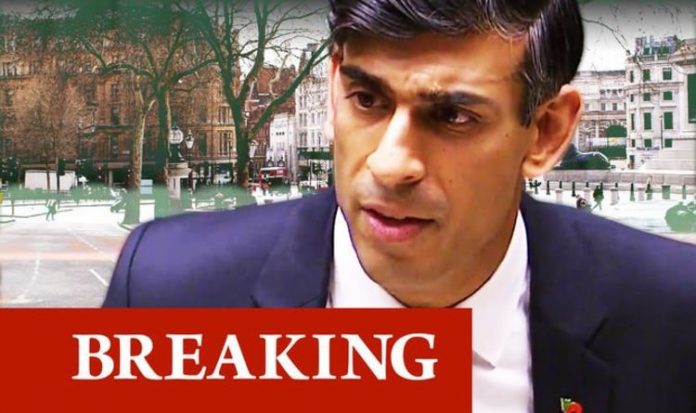 The Chancellor’s decision to extend the furlough scheme, which provides 80 percent of the pay of temporarily laid-off workers, has sparked panic the lockdown could last months beyond the December 2 expiration date. One Twitter user said: “Does that suggest the government think that the current lock down will be extended?”

Another said: “Sunak expected to extend furlough scheme to March. Odd for a lockdown for 4 weeks. Looks like we’ll all be emerging in spring at this rate!”

Making his announcement in the Commons, Chancellor Sunak said his highest priority was to protect jobs and livelihoods as he admitted the “economic risks are skewed to the downside” as the coronavirus crisis continues to spread across the UK.

He told MPs: “To give people across the UK certainty over the winter, I can announce today that the furlough scheme will not be extended for one month, it will be extended until the end of March.”

On Wednesday evening, MPs voted by 516 to 38 – a Government majority of 478 – for the new restrictions, which are due to expire on December 2.

It comes after the Bank of England said it was increasing the size of its government bond purchases by a further £150 billion, helping the government to fund the surge in public spending.

Mr Sunak went on: “The Bank’s forecasts this morning show economic activity is supported by our substantial fiscal and monetary policy action.

READ MORE: Furlough scheme ‘to be extended beyond December’ across UK

“And the IMF just last week described the UK’s economic plan as aggressive, unprecedented, successful in holding down unemployment and business failures, and one of the best examples of co-ordinated action globally.

“Our highest priority remains the same: to protect jobs and livelihoods.

“This treasury is and always will be a treasury for the whole of the UK.”

Mr Sunak told parliament he would review the policy in January.

“That has been the case since March, it is the case now and will remain the case until next March.

“It is a demonstration of the strength of the Union and an undeniable truth of this crisis we have only been able to provide this level of economic support because we are a United Kingdom.”

The finance minister told the Commons “upfront guaranteed funding” for the devolved administrations will increase by £2 billion.

He added: “And I can announce today that the upfront guaranteed funding for devolved administrations is increasing from £14 billion to £16 billion.

“This Treasury is, has been and will always be the Treasury for the whole of the United Kingdom.”

Mr Sunak said he had to make “rapid adjustments” to the Government’s economic response to Covid-19 pandemic owing to how the virus has spread.

He told the Commons: “I know that people watching at home will have been frustrated by the changes the Government has brought in during the past few weeks.

“I have had to make rapid adjustments to our economic plans as the spread of the virus has accelerated.”

The Chancellor also outlined support for those who are self-employed, saying: “For self-employed people, I can confirm the next income support grant which covers the period November to January will now increase to 80 percent of average profits up to £7,500.”