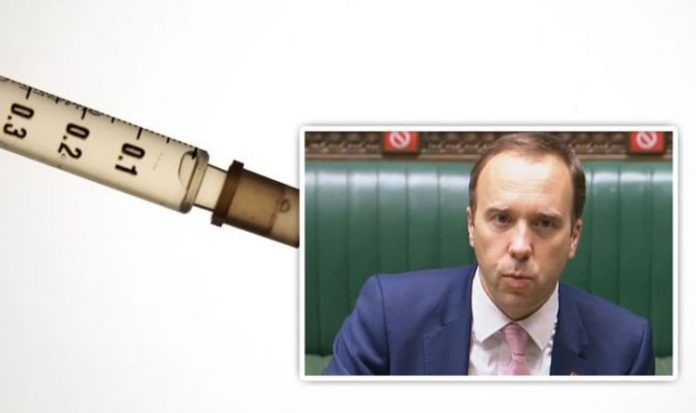 Health Secretary Matt Hancock recently hailed the news that Pfizer’s vaccine was 90 percent effective in developing an immune response to coronavirus. Both Oxford and Pfizer’s candidates are in phase three clinical trials, and are expected to be released to the most vulnerable groups by the end of the year. It comes as the UK has reported a total of 1,237,198 cases and 49,861 deaths as of Tuesday.

The cost of rolling out the Pfizer vaccine is likely to be at least ten times higher than Oxford’s according to a Telegraph report.

Two doses of the US and German jab cost £29.47 for Americans, with the UK purchasing 40 million of the doses.

Whereas the Oxford vaccine costs £2.23 for one dose for EU citizens, with Britain buying 100 million.

The government has not disclosed details about how much the Pfizer vaccine cost the UK.

In another blow to the Pfizer vaccine, those receiving it need the two jabs three weeks apart.

Dr Jonathan Stoye, group leader, Retrovirus-Host Interactions Laboratory, at London’s Francis Crick Institute, added to The Telegraph: “One can foresee at least two drawbacks to the Pfizer vaccine, even assuming it works as well as we currently think.

“First, it requires two injections for full effectiveness, spaced three to four weeks apart. Second, it needs to be stored at -80 degrees before use.

“Both properties will severely complicate administering the vaccine.”

In the House of Commons, Mr Hancock did say the Pfizer vaccine will be ready for use by December.

The Health Secretary asked the NHS to “be ready” to roll out doses to care home residents and those over 65 years old.

He added however that “there are no guarantees” about the jab, and said “we don’t know” what percentage of the population will need it for life to return to normal.

Mr Hancock then said: “The honest truth to that question is we don’t know what proportion of the population vaccination needs to reach in order for this to stop the epidemic.

Sir John Bell, Regius Professor of medicine at University of Oxford, also said to MPs he was “quite optimistic” about the news of the Pfizer vaccine, and added the UK has a “70, 80 percent chance” of returning to normality after Easter.

The UK has reported a further 20,412 cases of coronavirus yesterday.

It also saw a further 532 deaths, according to the Office of National Statistics.