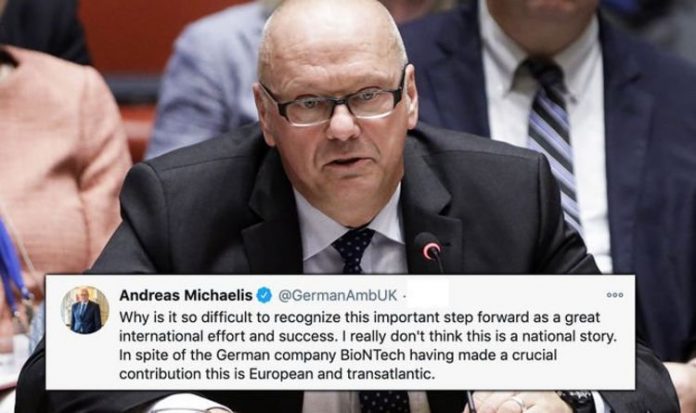 Andreas Michaelis made the comment on Twitter after the UK became the first country to approve the vaccine for public use. The Government has an ambitious vaccination programme which will begin next week.

After the vaccine was approved on Wednesday Mr Sharma tweeted: “The UK was the first country to sign a deal with Pfizer/BioNTech – now we will be the first to deploy their vaccine.

“To everyone involved in this breakthrough: thank you.

“In years to come, we will remember this moment as the day the UK led humanity’s charge against this disease.”

The approved vaccine was produced by Pfizer, an American company, and German firm BioNTech.

Mr Michaelis argued BioNTech’s involvement meant it should count as a European success.

He tweeted: “Why is it so difficult to recognize this important step forward as a great international effort and success.

“I really don’t think this is a national story.

Boris Johnson welcomed the news but warned protective measures will still be needed for some time.

He tweeted: “The approval of a vaccine is a huge step towards normality, but the rules in your area have not changed.

“Please keep following the restrictions to protect those around you.”

Mr Michaelis tweet sparked a backlash with some social media users arguing it was undiplomatic.

One commented: “Odd tweet for an ambassador to the UK to make.

“I’d have thought the role was to facilitate and improve the relationship rather than nit pick and play to the anti-government gallery.”

Another added: “Alok isn’t saying it isn’t an international effort & success. Of course it is, without question.

“The UK made a good early choice & approved early. For that we’re grateful.

“The UK is very grateful to Pfizer & Biontech for this incredible achievement. It’s not a competition.”

However Mr Michaelis remark was welcomed by Labour politician Andrew Adonis who tweeted: “Well said Mr Ambassador. So refreshing hear the voice of European co-operation rather than the Brexiter voice of xenophobia & petty nationalism.”