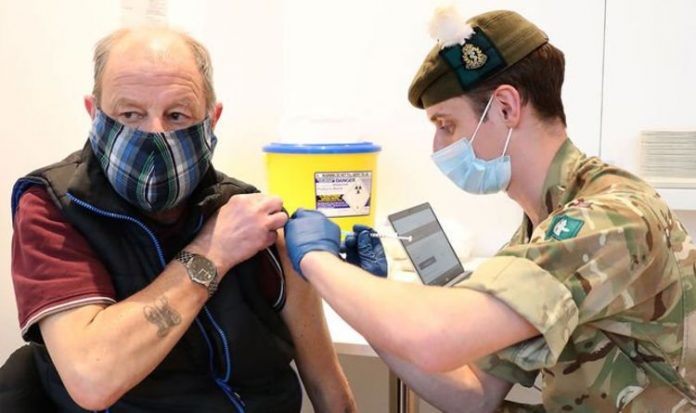 In total just under 11.5 million people have been vaccinated in the UK, a far higher figure than in any other European country. The Government remains well on track to hit his target of vaccinating the 15 million most vulnerable people by the middle of this month.

Figures published by the Government revealed another 494,163 people received their first coronavirus vaccine on Friday, with a further 4,064 getting their second dose.

Only January 30, when 598,389 Britons were vaccinated, recorded a higher figure.

He said: “What an achievement, another big weekend and the team continues to deliver.

In total nearly 11.5 million people have been vaccinated in the UK (Image: GETTY)

“Almost at 11.5m on 5th February vaccinated with first dose.

“Protection in three weeks’ time for the most vulnerable and those who look after them.”

Speaking to the BBC Dr Clive Dix, who chairs the UK’s vaccine task force, said Britain is “ahead of the game” and expressed confidence everyone aged over 50 will be offered a vaccine by May.

He said: “We will work day and night to ensure we meet whatever the target that’s feasible can be met.

The UK has vaccinated more people than any other country in Europe (Image: GETTY)

“So I’m very optimistic that we will meet the May target.”

Dr Dix added Britain is “at the forefront of surveying” new coronavirus variants.

He added: “We’ll make libraries of future vaccines, just small amounts, enough to then, if it does occur, do a quick clinical study to see that it works and then start manufacturing it.”

Mutated forms of the virus, first detected in Kent, South Africa and Brazil, are believed to be more infectious than the original.

On Saturday another 18,262 coronavirus cases were confirmed (Image: GETTY)

On Saturday it was confirmed another 828 people had died within in 28 days of a positive coronavirus test across the UK.

In addition another 18,262 Covid-19 cases were confirmed.

In total Britain has recorded more than 100,000 coronavirus related deaths, more than any other country in Europe.

However former Health Secretary Jeremy Hunt warned the UK must improve its track and trace system to avoid risking a “cycle” of lockdowns in new Covid variants emerge that are resistant to vaccines.

The UK has recorded more coronavirus deaths than any other country in Europe (Image: EXPRESS )

Speaking to BBC Breakfast he said: “The worry that we have to really plan for is the possibility that we will have a new mutation that is actually immune to the vaccines that we’re giving out at the moment.

“So, in order to make sure that we don’t get caught out by that again, we need to get transmission levels down to the kind of levels where we can do incredibly thorough contact tracing, like they do in Korea and Taiwan.”

Mr Hunt also urged the Government to “make up any salary losses” of those told to isolate by the NHS’s track and trace service to encourage compliance.

Health Secretary Matt Hancock has said he hopes every adult in Britain will be offered a coronavirus jab by the autumn.

READ  BBC backs down: Rule Britannia will NOT be cut from BBC Proms after furious backlash | UK | News (Reports)

The army was brought in to help administer vaccines in Scotland (Image: GETTY)

The Government is currently conducting surge testing in a number of areas where the South African Covid variant, which may be more resistant to vaccines, has been detected.

Most recently this has been extended to parts of Worcestershire after a new batch of cases was confirmed.

They hope to contact all those living in the WR3 postcode as well as areas of WR9.