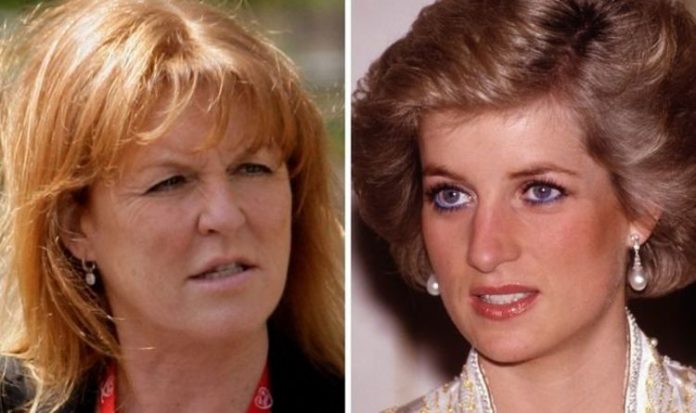 The Duchess of York, affectionately known as Fergie, is the subject of tonight’s Channel 5 documentary When Fergie Met the Monarchy. The early years of her life inside the Royal Family will be dissected, including the backlash Fergie received from the Queen and Prince Philip after the infamous ‘toe-sucking’ incident. The 61-year-old soared in popularly after marrying the Queen’s son Prince Andrew in 1986, and alongside her sister-in-law Princess Diana, the pair sparked a new interest in the Royal Family.

She and Diana, however, endured a difficult relationship at times, and despite their closeness away from the spotlight, Fergie was heartbreakingly not on speaking terms with Diana before she died in 1997.

A 2019 documentary, The Royal Family at War, detailed what happened in the fallout, and how they remained friends despite both separating from their husbands in 1992, and divorcing them in 1996.

Author Robert Jobson, the Evening Standard’s royal editor, told the programme that Fergie’s autobiography My Story – published 25 years ago – would play a part in the friends’ split.

She said: “Sarah made clear that she was going to write a book, and Diana was supportive of that.

Sarah Ferguson’s heartbreaking final row with Diana ‘after she was given verrucas’ (Image: GETTY)

“But she said, I don’t want you to mention me at all.”

Yet, in the autobiography, Fergie wavered her friend’s request and detailed how Diana had given her an infection.

She wrote: “Diana helped me by giving me all her shoes (and less happily, her plantar warts).”

Plantar warts are otherwise known as verrucas, and the intimate revelations of their friendship saw Diana and Fergie refuse to speak to one another again.

JUST IN: Princess Eugenie could ‘step away’ from tradition with royal baby

Sarah Ferguson and Diana were close before row (Image: GETTY)

Royal author Katie Nicholl said: “I think Sarah made many attempts to make it up but Diana bore a bridge – she could really bear a grudge.”

Mr Jobson added: “They probably would have repaired that relationship, but it didn’t happen. It’s a sad ending.“

Tina Brown – who penned the 2007 biography The Diana Chronicles – said while Fergie was “full of nice comments about her sister-in-law”, the reference to warts was a “fatal line”.

She added: “Goddesses don’t get warts. Despite Fergie’s pleading apologies, Diana never spoke to her again.”

Royal Family: They both divorced their husbands in 1996 (Image: GETTY)

Ms Brown also revealed how in 1997, the year of the princess’ death, Diana gave a birthday party for her friend David Tang and “told him he could ask anyone he wanted.”

When he asked to invite Fergie, Diana refused the request.

This evening’s documentary will also take a deeper look at Fergie’s relationship with other royals, including her mother and father-in-law and their reaction to the photographs published of her and Texan millionaire John Bryan.

Images of Fergie lying on a sunbed while John appeared to put her toes in his mouth emerged on the morning’s papers in 1992.

Royal insider Emily Andrews told the documentary that the papers were “laid out on a table in the breakfast room in Balmoral”.

Tom Quinn, a royal author, added: “[John] claims, as if it makes any difference, that he was kissing her toes. It’s impossible to imagine the shock and horror, even for someone as confident as Sarah.

“Apparently Prince Philip came into the breakfast room, picked up one of the papers and just threw it in front of her and walked out.

“Famously, Sarah sent flowers to Princess Margaret, who sent them back with a note saying, ‘You’re an absolute disgrace to the family.'”

After Fergie faced further criticism in 2010, an insider opened up to about the state of the Queen and Philip’s relationship with the Duchess of York.

They said: “It’s stupid to say that the Duke of Edinburgh has any issue with Andrew and Fergie’s relationship.

“He really doesn’t care anymore, on any level. He stands in for Prince Philip every now and then since his retirement but the truth is his official role as the Duke of York is severely limited.

“The Queen is relaxed because of her personal affection towards Fergie, despite the Duchess’s previous bad behaviour. Charles is not OK with Fergie. He can’t stand her in reality.”

As Fergie and Andrew agreed their divorce, the Queen reportedly asked what she wanted in the settlement, to which she said “your friendship”.

Since that conversation, they have remained on good terms.

A source told The Sydney Morning Herald: “The Queen always tries to see the best in people and she has stayed in close touch, even having tea with her regularly at Windsor.”

When Fergie Met the Monarchy airs tonight on Channel 5 from 9.30pm.