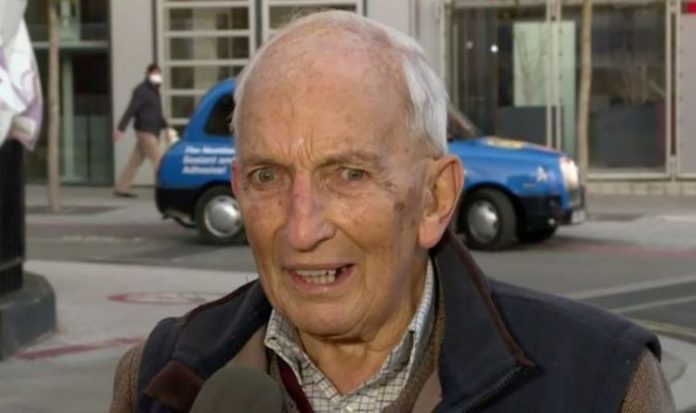 The UK began administering Covid-19 vaccines on Tuesday, becoming the first major western country to do so. One of those who received a jab was pensioner and grandfather Martin Kenyon.

He was interviewed for American TV shortly after the procedure and clips went viral due to his stereotypically British mannerisms.

Mr Kenyon admitted he was late as “I couldn’t find anywhere to damn well park” and said he hopes not to get the “bloody bug” before immunity is provided by the vaccine.

He also said he hoped to live “a long time” so he can watch his grandchildren growing up.

Vaccinations began in hospitals across the UK on Tuesday primarily going to those aged over-80.

The first to receive a dose was Margaret Keenan, 90, from Coventry.

Doses of the vaccine are currently being prioritised for the elderly and healthcare workers.

Mr Keyon explained how he got his vaccination to CNN’s Cyril Vanier.

READ MORE: British grandma, 90, urges others to have Covid jab after getting it

“I went off and had a rather nasty lunch and then came back and they were ready for me.

“And no it didn’t hurt at all – I didn’t know the needle had gone in until it had come out.

“It was very interesting. No it was painless.”

According to a senior medical source, speaking to the BBC, “thousands” of people received a vaccine on Tuesday.

The plan is for each person to receive two doses of the vaccine, though the first dose is believed to offer some protection on its own.

Some 800,000 vaccine doses will be distributed in the coming days with millions more expected to arrive in the UK before Christmas.

However, it isn’t expected to be until late winter or early spring that enough arrive to vaccinate the entire population.

Mr Kenyon noted he hopes not to catch Covid-19 in part because “I have granddaughters and I intend to live a long time to enjoy their lives.”

The pensioner added he’d been given a “very unexciting” card containing details of a follow up appointment.

Thus far the UK has confirmed over 62,000 coronavirus related deaths.