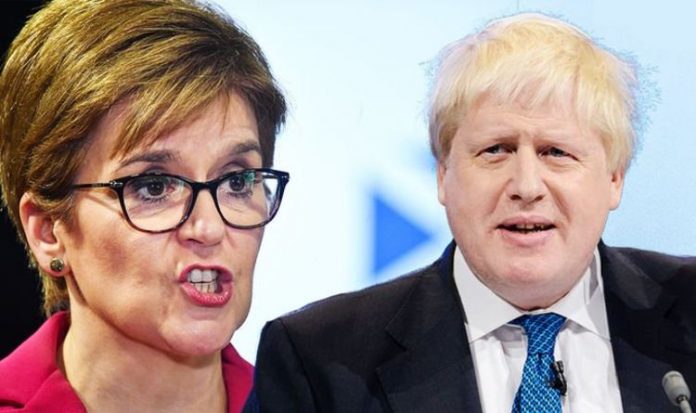 Scottish First Minister Nicola Sturgeon has kept open the possibility to hold a second referendum on independence next year. Ms Sturgeon has only revealed she wants the vote to be in the early part of the next Scottish parliamentary term, following elections to Holyrood in spring 2021. If the Scottish National Party (SNP) wins a majority, senior figures believe it will give them the mandate to demand a referendum, regardless of what Prime Minister Boris Johnson thinks about it.

So far, since the start of 2020, opinion polls have given “Yes” campaigners a consistent lead over their unionist rivals.

That is a subject that divides hardliners who want a Catalonia-style illegal referendum and those prepared to play the long game who think the refusal to allow a vote will only fuel support for independence.

Should a second referendum happen, the separatists will be promising the loss of the fiscal transfer presently worth at least £10billion, the severing of Scotland from a UK single market worth almost 30 percent of its GDP, and above all, the financial chaos set to be unleashed by the SNP’s currency plan.

Nicola Sturgeon had to abandon OWN policy after Scottish independence blunder (Image: PA)

Even among separatists support for retaining sterling is high.

A recent poll found that, post-independence, 54 percent of respondents support using the UK’s currency permanently, with only five percent in favour of establishing a brand new Scottish currency.

Unfortunately for the nationalists, the Scottish electorate’s most unpopular currency option is also the most likely and the one the SNP are currently campaigning for.

Ms Sturgeon was forced to make a significant U-turn during her time in office.

Ahead of the 2014 Scottish independence referendum, the SNP kept insisting that Scotland would continue to use sterling indefinitely as part of a formal currency union with the remainder of the UK.

However, a permanent currency union with the UK would never have been accepted by voters in England.

Should Scotland be an independent country? (Image: EXPRESS.CO.UK)

At the time, Ms Sturgeon said Westminster was “bluffing” and speaking to BBC Radio 4’s Today Programme, former Scottish Finance Secretary John Swinney said: “The minute the UK political establishment believes there is a possibility of us being successful, they will rush to come to some sort of agreement, to be involved in this process, to get some agreement with the people in Scotland, is very clear to see from the actions of the UK party leaders.”

Mr Swinney, now the Scottish deputy First Minister, said: “So if we get a Yes vote, a week today, then what we will have is an emphatic mandate to ensure that Scotland secures that currency union on behalf of the people of Scotland.”

Even the dissident voice of Jim Sillars, former ex-SNP deputy, agreed that a Yes majority would have meant that the UK gave in to the demands of Scotland on the currency union.

Writing in his 2015 book, ‘In Place of Failure: Making it Yes Next Time…Soon’, Mr Sillars said: “I have no doubt that had there been a Yes majority, the UK Treasury would have rapidly changed its tune.”

However, he pointed out: “But throughout the campaign, and as a major contributor to uncertainty, the proposal of currency union was a gift to the No side.”

As opposed to 2014, Ms Sturgeon is now planning to have a relatively long transition period where they continue to use sterling, before creating a free floating currency that will allow them to subsequently join the euro.

In an exclusive interview with Express.co.uk, Ronald MacDonald, research professor of macroeconomics and international finance at Glasgow University’s Adam Smith Business School, cast a shadow over the SNP’s plan.

He said: “The underlying deficit has not changed too much since last year.

“It went up by half a percent, I think.

“That is not a sustainable deficit in itself.

“So they [the SNP] have argued in the Growth Commission report that they could handle that by having higher growth if they were independent.

“But they haven’t said how they are going to get it.

“Of course, on top of that you have the coronavirus crisis, which means the deficit going forward. It will probably be somewhere in the 20 percent region or even 30 percent.

The First Minister’s argument, the macroeconomist noted, seems to be that she can do what other governments are doing, which is to borrow heavily on financial markets at relatively low interest rates.

However, Mr MacDonald claimed there is a huge problem with that.

He continued: “Their strategy for an independent Scotland is to have a relatively long transition period where they continue to use sterling.

“Borrowing in a foreign currency is a very dangerous strategy, particularly if you are borrowing the kind of sums of money they are talking about.

Brexit: UK should not ‘cast the blame onto Scotland’ says Russell

“The reason for that is that if you adopt sterlingisation that is a form of a rigidly fixed exchange rate.

“The UK has a flexible exchange rate. It means that when you get a shock to the economy, you have some means to adjust the economy to that.

“By adopting the currency of another country you really are fixing your currency against that currency. And you have got no means of adjustment.

“That is not tenable for an independent country.

“I have argued separately it could lead to bankruptcy.

“They haven’t thought through the macroeconomic framework.”

He concluded: “It is a very complex mix and unfortunately that complex mix has not been spelt out to the electorate.

“That is my concern. I hope if there is another referendum campaign, people will start putting these arguments to them.”