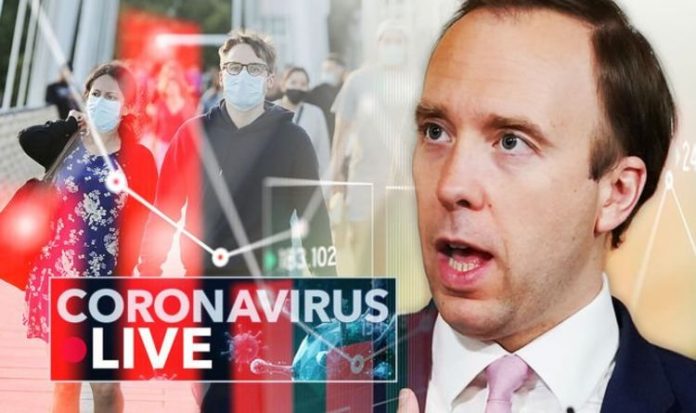 Greater Manchester’s 2.8 million residents had the most severe restrictions imposed at 00.01am, closing some 1,800 pubs and 140 wine bars, as well as 277 betting shops and 12 casinos. Following a bitter spat between local leaders and the Government, Mancunians joined 3.1 million people in Lancashire and the Liverpool City Region in having the “very high alert” slapped on.

Meanwhile, tomorrow Stoke-on-Trent, Coventry and Slough are set to move into “high” Tier 2 rules, which will mean an extra 745,000 face significant changes to their daily lives as social mixing with loved ones is banned indoors.

When the latest raft of restrictions is rolled out, it will bring the number of Britons living under some form of lockdown to 40 million as the country grapples with one of Europe’s fastest-growing second waves.

And Health Secretary Matt Hancock has warned leaders in Nottinghamshire they could be next to have strict measures ordered on their population.

Amid a surge in COVID-19 infections in the county, local authorities have been drawing up plans to move certain areas into Tier 3.

On Wednesday the UK recorded 26,668 fresh coronavirus infections – the highest amount declared in a single day since the pandemic took hold last spring.

Scots are also bracing for stricter rules this winter and First Minister Nicola Sturgeon will on Friday announce a five-tier plan of measures for dealing with the pandemic.

If approved at Holyrood next week, the new measures will come into force in Scotland on Monday November 2.

The SNP leader will discuss the tiered system at her daily coronavirus briefing today as well as plans to increase testing capacity north of the border.

Speaking ahead of the briefing she said it is vital that leaders work “determinedly, energetically and collaboratively to suppress the virus to the lowest possible level – and keep it there”.

In a radio interview on Thursday, Scotland’s clinical director Professor Jason Leitch warned people to prepare for a “digital Christmas”.

7.58am update: Dodds claims workers ‘knocked out of support’ under No10’s economic plan

Gaps in the Government’s winter economy plan mean some workers have been excluded from support, Shadow Chancellor Anneliese Dodds said.

Speaking on BBC Breakfast, she said people who have savings were “knocked out of support”.

On the gaps in support, she said: “We didn’t really see any recognition of that, I think that’s very problematic.

She added: “A big issue here is the fact that our social security system could be fixed really quite quickly, it wouldn’t necessarily even be particularly expensive to fix it.

“If people got a little bit of savings, which a lot of self-employed people do have, then they get knocked out of that support very quickly, they have to wait for five weeks.

“The Chancellor could’ve fixed that yesterday but he decided not to do that unfortunately.”