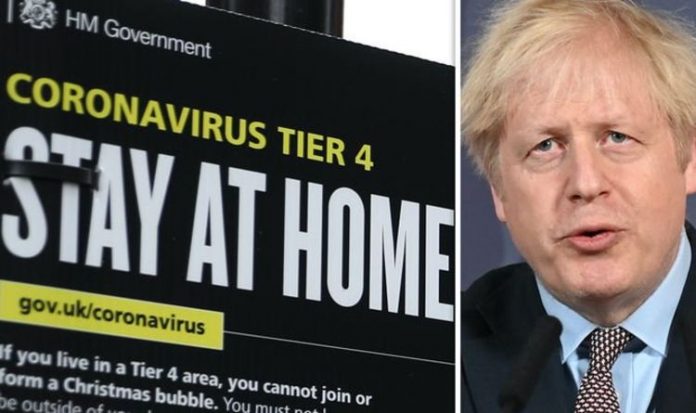 It comes after Boxing Day saw another six million English people placed into the toughest tier of coronavirus restrictions. Wednesday sees the Government review the latest status of each region in England, with many more people expected to be told to “stay at home”. Total cases of coronavirus have risen by 30 percent this week compared to last week, with a grim seven-day rise of 248,199 as of yesterday.

Yesterday saw cases rise by a further 30,501, as well as another 316 deaths within 28 days of a coronavirus diagnosis.

day Times reported weekly infections soared by a massive 57 percent compared to the week before it, with the new strain of the virus being identified further north.

The London School of Hygiene and Tropical Medicine believe the news strain of COVID-19 is 56 percent more infectious than the original form of the virus.

First reported in September in Kent, the new strain has now been identified in 10 other countries.

Hospitalisations from coronavirus is also causing strain on NHS capacity, with experts warning patients could exceed the first wave of the virus.

In April, 21,683 patients were admitted to hospital due to coronavirus complications.

According to Government data on December 22, UK hospitalisations from coronavirus stood at 21,286, with health chiefs warning the number will overtake the April peak by the end of the year.

day Times has reported hospitals have been ordered to use all their “surge capacity” in anticipation of an increase in admissions.

Dr Zubaida Haque, Independent SAGE (ISAGE) member, tweeted over the weekend condemning the ease of restrictions over Christmas and urged the Government to put the whole of England into Tier Four.

She tweeted: “Given that we surpassed 70,000 #COVID19 deaths in UK on Christmas Day, and there are now more patients with coronavirus in hospital than at any point in the pandemic, why hasn’t the government implemented #tier4 restrictions everywhere in the UK? Independent Sage are very worried.

“Given the crisis situation we’re in with the highest number of daily deaths with #COVID19 in 2nd wave, with 1000’s more likely to be infected because of relaxation of rules in tier 1-3 on Christmas Day AND failed govt’s test & trace system, we need #tier4 everywhere now to save lives.”

The medical professional also posted ISAGE’s Christmas Eve statement recommending the Government “immediately” rescind relaxed rules, as well as “put in place an emergent plan to enable safe education” in the new year and “focus all efforts on mass roll-out of vaccine”.

The Isle of Scilly is the only region in England still in Tier One restrictions, with Cornwall and the Isle of Wight moved to Tier Two on Boxing Day.

Around 43 percent of the country is under Tier Four restrictions, where tough lockdown measures are applied.

Prime Minister Boris Johnson and other ministers have previously indicated Tier Four restrictions could last until the spring next year.