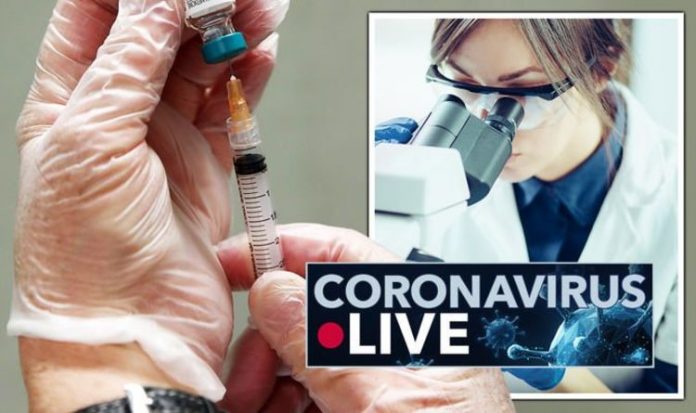 AstraZeneca Plc said it has paused global trials, including large late-stage trials, so an independent committee could review safety data. The vaccine had previously been described by the World Health Organisation as probably the “world’s leading candidate” for a coronavirus vaccine. The US was also aiming for a fast-track approval before the November presidential election.

The company said in an emailed statement: “This is a routine action which has to happen whenever there is a potentially unexplained illness in one of the trials.”

The nature of the illness has not yet been revealed.

But the volunteer is expected to recover, according to Stat News, which first reported the suspension due to a “suspected serious adverse reaction”.

Health Secretary Matt Hancock when asked about the Astra Zeneca vaccine pause, said: “It’s a standard process within clinical trials whenever they find something they need to investigate.

“There has been a pause earlier in the summer and that was resolved without a problem.”

The vaccine, which is called AZD1222, is in late-stage clinical trials in the United States, Britain, Brazil and South Africa, with additional trials being planned in Japan and Russia.

The trials aim to enlist up to 50,000 participants globally.

Matt Hancock told Sky News’ Kay Burley that the new restrictions on social gatherings, which will be restricted to no more than six people from Monday, are to try and head off a second wave.

He said: ‘If you look at what happened in Belgium they saw an increase and they brought it down, whereas in France and Spain that just hasn’t happened’

‘If you have a rise in cases and you don’t act that inexorably leads to more people in hospital and more people dying of coronavirus.’

‘Our contact tracing system, which is now excellent, shows the majority of transmission of disease is in social circumstances.’