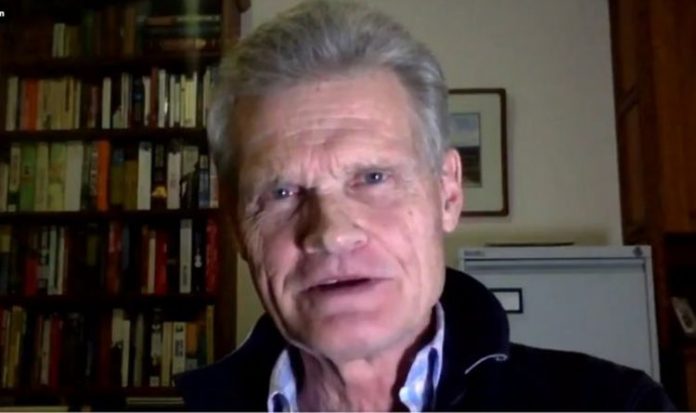 It comes after Prime Minister Boris Johnson said yesterday he was optimistic the “vast majority” of people who need the vaccine most will get one by Easter. The University of Oxford recently announced that its vaccine could be up to 90 percent effective.

The UK vaccine, produced in cooperation with AstraZeneca, is 70 percent effective based on interim data, but this could be improved with tweaks, according to reports.

Now, Professor Sir John Bell, Regius Chair of Medicine at the University of Oxford, has expressed hope of a return to normality.

Speaking on BBC Newsnight yesterday, the medical expert said: “I’m quite optimistic that we’ll get ourselves out of trouble some time over the course of the next few months.

“I always put the odds of that of being 50 percent. Because it’s hard to make vaccines to respiratory pathogens. This was not a given.

“The way things were bumping along at the beginning, it wasn’t clear that the testing was going to go well, therapies were hard to find, it was a bad time last spring.”

It is thought the Oxford University vaccine will be easier to transport and store than the ones produced by pharmaceutical firms Pfizer and Moderna.

The UK Government has ordered 100 million doses of the Oxford vaccine, though it has not been approved by regulators yet.

Despite Professor Bell’s optimism, Boris Johnson warned Britons yesterday to be “jolly careful” over the Christmas season, adding: “We are not out of the woods yet.”

He said: “It will be months before we can be sure that we have inoculated everyone that needs a vaccine. And those months will be hard. They will be cold.

“They include January and February when the NHS is under its greatest pressure. And that is why when we come out of lockdown next week we must not just throw away the gains we have all made.”

Mr Johnson confirmed the UK’s current lockdown restrictions would end on December 2, but warned a new, tougher three-tier system will come into place until at least March 2021.

In the two lowest tiers, hospitality establishments are permitted to reopen while the previous 10pm deadline has been changed to refer to last orders rather than closure.