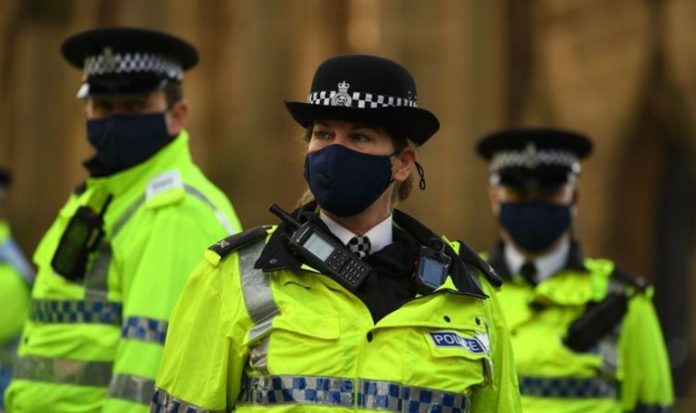 It comes after 20 million people in England were told yesterday they would be placed under the country’s toughest Covid-19 restrictions from today. The Government has said people living under the measures “cannot meet other people indoors” even over New Year’s Eve.

However, earlier this month the Night Time Industries Association claimed it expects over 5,000 illegal parties and raves to take place from today until January 3.

It also warned there could be “social unrest” as “millions” of people gather around the country.

John Apter, National Chair of the Police Federation of England and Wales, told Express.co.uk the urge to have “usual” end-of-year celebrations would be “tempting”.

However, he added: “Demand on policing is also as great as ever and my colleagues are working around the clock to protect the public from this deadly virus on top of responding to non-Covid related 999 calls.

“We would urge the public to continue to act responsibly and follow the rules. For many of us, this will mean celebrating the New Year in a different way.

“Making a small sacrifice will help reduce the impact on our overwhelmed emergency services and keep each other as safe as possible.”

Only last week, police in Wales shut down an illegal rave in the city of Cardiff.

South Wales Police said officers were alerted to an “unlicensed event” in the area of Pontprennau at around 10.45pm.

Many revellers fled when the police turned up, but some remained and were reported for summons for breaching coronavirus regulations.

Officers also captured a trailer, generators, and speakers from the site.

Andy Valentine, Chief Superintendent, said: “It is extremely disappointing that members of the public were willing to put themselves and the wider community at risk during Alert Level 4 restrictions.

“No one can fail to be aware of the pressures now facing the NHS from COVID-19 as well as the number of people who are sadly dying.

“Further enquires are ongoing to identify the organisers with a view to prosecution or the issue of a £10,000 fixed penalty notice.”

Earlier this month, Michael Kill, CEO of the Night Time Industries Association, said in a statement there was “growing concern” about a “substantial number of illegal parties … following the closure of businesses at 11pm”.

However, the nation’s coronavirus rules have since changed for many areas, meaning a large number of hospitality businesses will not be open at all.