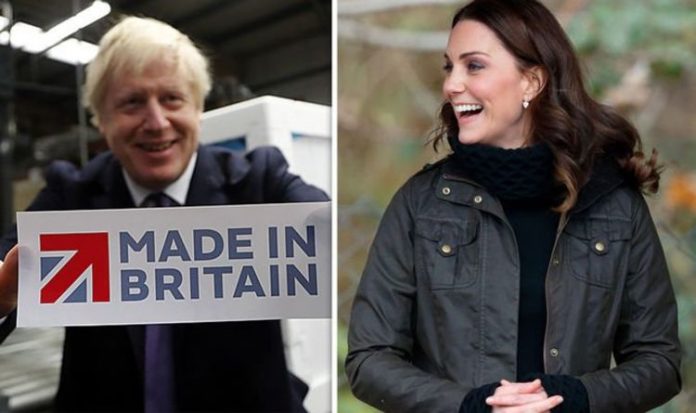 A whopping 90 per cent of 2,000 consumers surveyed for the not-for-profit organisation believe it is important to buy British-made products, with two-fifths (44 per cent) preferring to purchase UK-manufactured goods regardless of cost. Shoppers were quizzed on how coronavirus had changed their spending habits along with their motivation to support UK retailers, manufacturers and producers. The coronavirus health crisis was cited as a major influence on purchasing habits, although Brexit was another big factor with 29 per cent of respondents saying their shift to “Buying British” began after the Brexit referendum in June, 2016.

John Pearce, CEO of Made In Britain, told the Daily Express: “It’s clear that British shoppers are keener than before to buy British to ­stimulate the economy, with Covid having had a bigger effect on British consumer loyalty than Brexit.

“When someone purchases a British product they can be confident that it’s well made, to ethical standards, and that it’s better for the environment.”

The results of the survey, conducted by OnePoll for Made in Britain’s second “Buying British” report, come amid the Bank of England’s predictions that the economic slump may be not as bad as first feared last week.

The Bank’s Governor Andrew Bailey was speaking as he publicly supported the Government’s confirmation that the furlough scheme for workers costing £33.8billion to date will end in October.

Prime Minister Boris Johnson has separately called on consumers to “shop with confidence” to give a boost to retailers hard hit by lockdown and financial insecurity.

And Chancellor Rishi Sunak has hailed the nation’s high streets as “vital in helping to kickstart our economy”. Now the poll shows that Britons are keen to play their part by making patriotic purchases to help the nation’s businesses in overcoming this difficult time.

The survey reveals the top five things people would be happier to pay more for if they were made or produced in Britain are fruit and vegetables, farm produce such as meat and eggs, locally-sourced fish, clothes and shoes.

Mr Pearce urged the public to “look out” for the official Made In Britain mark on products and websites “to help keep the many small business owners and makers that make up such a large proportion of our workforce in this country in jobs”.

The membership directory uses a registered collective mark guaranteeing that each of its sign-ups ­manufactures only in Britain. The organisation has seen a 60 per cent increase in accreditation requests since April.

The research also showed flying the flag when spending is not just down to coronavirus and economic necessity.

Other key factors influencing respondents include a greater trust in the quality of British goods.

Some 48 per cent of people surveyed said they considered British products to be better than overseas goods as they adhered to safety and quality regulations.

This is a five per cent increase from the end of 2019 when the results for Made In Britain’s first annual “Buying British” report were revealed. At the time, Mr Johnson was pictured slapping a “Made In Britain” sticker on a washing machine at a manufacturing factory in England.

Concerns for the environment also featured as a key motivating factor, with seven in 10 Britons (71 per cent) believing buying British could help the nation combat ­climate change.

Additional research for the report also indicates businesses are willing to step up too when buying goods and services.

Three-quarters of 1,000 decision makers at British companies responsible for purchasing and procurement who were polled said they were “more likely to buy British” to boost the UK post-pandemic economy. A heartening 86 per cent were happy to pay more, up five per cent from 2019, and 64 per cent were willing to buy British whatever the cost.

Four in 10 also believe the ­pandemic will reshape British manufacturing for the better.

He said: “We are also extremely proud to see a coming-together of British business in the face of adversity with almost a third (30 per cent) of companies responding to the Government’s calls to action to aid with the crisis. Indeed, a number of our own members have pivoted or diversified product lines to support coronavirus efforts.”