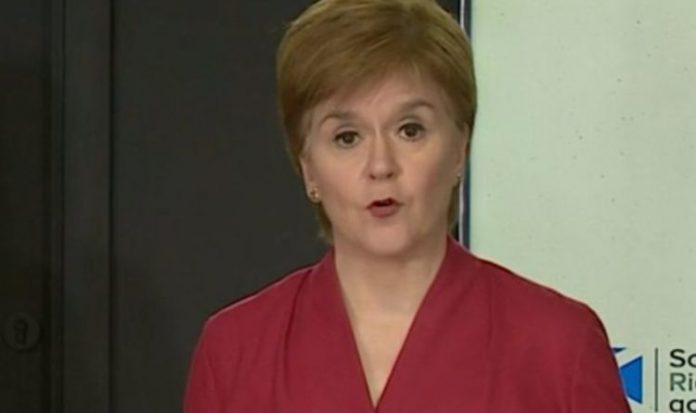 Speaking at her daily coronavirus press briefing in Edinburgh, Nicola Sturgeon admitted her Government “did not get it right” when calculating grades for students who were unable to take exams because of the pandemic. She said: “Let me be clear about this. In a very difficult and unprecedented situation we took decisions that we thought on balance were the right one.

“And we took them with the very best of intentions. These were broadly the same decisions that had been reached for England and Wales as well.

“Our concern which was to make sure that the grades young people got were as valid as those who would have got in any other year, perhaps led us to think too much about the overall system and not enough about the individual pupil.

“That has meant that too many students feel they lost out on grades they should have had and also that that has happened as a result not because of something they have done but because of a statistical model or an algorithm.”

She added: “Despite our best intentions I do acknowledge that we did not get this right and I’m sorry for that.”

Pupils who had their recent exam results downgraded by the Scottish Qualifications Authority will not all be expected to appeal, the First Minister added.

The embarrassing U-turn comes after the Children’s and Young People’s Commissioner Scotland (CYPCS) called on the Scottish Government to apologise over this year’s exam results chaos, and to change the methodology for calculating grades.

With no exams sat this year due to the coronavirus pandemic, the Scottish Qualifications Authority (SQA) applied a methodology that saw grades estimated by teachers downgraded.

Pass rates for pupils in the most deprived data zones were reduced by 15.2 percent in comparison with 6.9 percent for pupils from the most affluent backgrounds.

The Commissioner’s office said children from more deprived areas have been downgraded based on the historic performance of their school rather than their performance.

And it called on Education Secretary John Swinney to direct the Scottish Qualifications Authority to “achieve a just outcome for all young people”.

In a letter to the (SQA) and the Scottish Government, the CYPCS lays out a series of steps to make the appeal process for pupils fairer.

It includes allowing young people to disagree with the grade estimated by their school, and grades being awarded based solely on the evidence presented and not “statistical modelling or moderation”.

“If this results in significantly higher pass marks compared to previous years, no further adjustment will be made to grades to seek to bring them into line with those historic statistics,” the CYPCS argues.

The letter also calls on the government and SQA to apologise to young people.

Nick Hobbs, CYPCS head of advice and investigations, criticised the SQA’s “refusal to discuss its proposed methodology in advance” and said young people are now “experiencing significant anxiety and distress”.

He added: “This situation has placed process before people, and in endeavouring to protect the system has delivered results to individual students that are simply unfair.

“It appears that too many young people have not received the results they deserve and they are due an apology as well as redress.

“Children from more deprived areas report being downgraded, not based on an assessment of their own abilities and potential but on the historic performance of the school they attend.

“The unfairness of this approach is obvious and it should make the government scrutinise in much more detail the way in which we assess young people’s performance and potential.”

The Scottish Government said Mr Swinney will set out a series of steps to address the concerns of pupils over exam results on Tuesday.

Mr Swinney said he had “heard the anger of students who feel their hard work has been taken away” and said he was “determined to address it”.

“These are unprecedented times and as we have said throughout this pandemic, we will not get everything right first time,” he said.

“Every student deserves a grade that reflects the work they have done, and that is what I want to achieve.

“I have been engaged in detailed discussions over the way forward and I know that we need to act and act quickly to give certainty to our young people.”