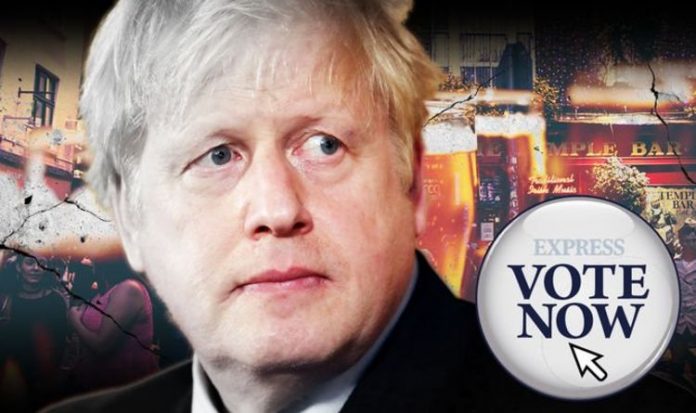 Coronavirus cases have surged over the past couple of weeks, with the latest figures revealing on Wednesday a further 14,162 people across the UK had tested positive for COVID-19. The huge infection spike will likely spark Mr Johnson into immediate action, who could announce within days a clampdown in response to alarming rises in coronavirus cases in some of the worst-hit areas, including major cities such as Liverpool, Manchester and Newcastle. Pubs, bars and restaurants only began reopening from July 4 as the UK slowly exited a three-month national lockdown.

But they have had several restrictions placed on them, and most recently, have been ordered to close by 10pm as part of tough curfew measures.

The tough new restrictions being announced by the Prime Minister are expected to divide England into three tiers depending on coronavirus risk and rising infections, with huge swathes of northern England being impacted most.

Areas in the highest tier would see pubs, restaurants and cafes closing, while those in the lowest tier could see current social distancing measures and the rule of six enforced.

The latest bumper package from the Chancellor will likely target businesses such as pubs that could be forced to close, or face new rules restricting their opening hours.

But despite the increased efforts, with Mr Sunak promising a new version of the hugely popular furlough scheme with more generous handouts, the Government is facing a huge rebellion by furious MPs from across Westminster.

Leading Conservative Party backbenchers have already made clear they will use a possible vote in the House of Commons to rebel against the 10pm curfew, with Labour leader Sir Keir Starmer signalling his party will also oppose it.

Pubs and restaurants in England have had tough measures imposed on them (Image: GETTY)

During a debate in the Commons, Mr Berry said: “I think the government has fallen into that fatal trap of making national decisions based on a London-centric view with London data.

“We want to remove the manacles of state control from our hands and from our feet, but we can do that only when we’ve beaten this virus.”

The latest crackdown would follow measure announced by Scotland’s First Minister Nicola Sturgeon on Thursday, including pub closures, limits on alcohol sales and opening hours, as well as a £40million package to businesses impacted by the changes.

Housing Secretary Robert Jenrick refused to rule out similar measures being imposed in parts of England, and said the Government is “considering a range of different options”.

The hospitality sector in Scotland has been heavily hit by new restrictions (Image: GETTY)

He told Sky News: “We’re trying to take a regional and proportionate approach and that means reviewing the passage of the virus in each part of the country.

“It is true that the virus is rising, in terms of the number of cases, quite significantly in the North West, in the North East and in a number of other cities like Nottingham.

“We are currently considering what the right action would be in those places and we’ll make a conclusion on that as soon as we can.”

Mr Jenrick insisted despite rising coronavirus infection rates in some of England’s coronavirus hotspots, local lockdowns had “flattened the curve”.

Coronavirus cases have surged throughout the country (Image: EXPRESS)

But he admitted the tough new measures had not yet worked as fully as ministers would have wanted.

The Housing Secretary said: “We haven’t yet seen the impact that we would like to have seen and we understand that’s extremely frustrating to local people in those areas.

“However, it is not correct to say that strategy isn’t working because, if we hadn’t chosen to put in place those measures, then the rate of infection would almost certainly be even higher than it is today.

But Mr Jenrick remained tight-lipped on a possible vote on the 10pm curfew on the hospitality sector taking place in the Commons next week, adding: “No decision has been made on that yet.”