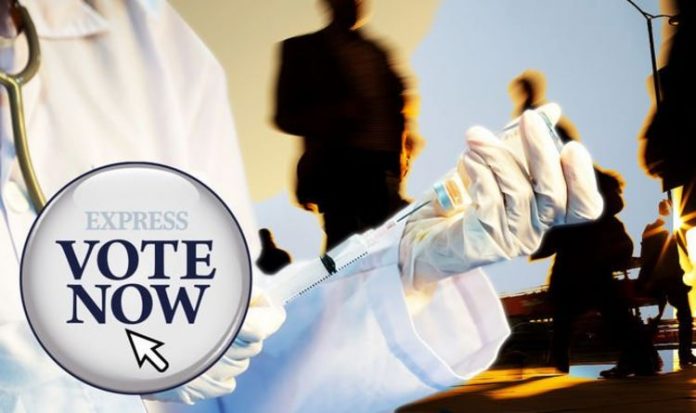 Pfizer and BioNTech confirmed initial results from their latest trial showed their drug to be 90 effective against coronavirus, while Oxford University and AstraZeneca will soon publish their results this month. Ahead of the roll-out of a potential vaccine, chair of the Foreign Affairs Select Committee and Tory MP for Tonbridge and Malling Tom Tugendhat said anyone who refuses to take a vaccine may suffer consequences. The MP claimed those who may reject a jab may not even be allowed to return to work or enter pubs and restaurants.

Speaking on the Huffington Post’s Commons People podcast, he claimed hospitality venues may ask for vaccination certificates upon entry.

He added: “If vaccination works and if we’re confident it’s safe, and all indications so far are good, then I can certainly see the day when businesses say, ‘Look, you’ve got to return to the office and if you’re not vaccinated you’re not coming in.’

“And I can certainly see social venues asking for vaccination certificates.

“There was no debates, no appeals and no further requests.

“And I can see a situation where yes, of course you’re free not to have the vaccine, but there are consequences.”

He said society will suffer if people refuse to take approved vaccines.

Following the release from Pfizer and BioNTech this week, health experts have stated the NHS is now preparing an operation to roll out the drug in the new year.

It is hoped, if a successful vaccine can be rolled out across the country with a large take-up, there will be no need for any further lockdowns.

The drug could also be rolled out by the Government as early as next month.

Ministers, however, have insisted the vaccine is not the silver bullet to ending the pandemic.

Health Secretary, Matt Hancock said: “I think that this is a promising step forward but there’s many steps that still need to be taken.

“Perhaps the most important to stress is that we’ve seen the effectiveness data but we will not license a vaccine unless it is clinically safe and we haven’t seen the final safety data.

“So that is the biggest hurdle still to come and if that fails then it doesn’t matter how effective this vaccine is, we won’t deploy it.

“And then, of course, there’s the enormous challenge of the rollout.”