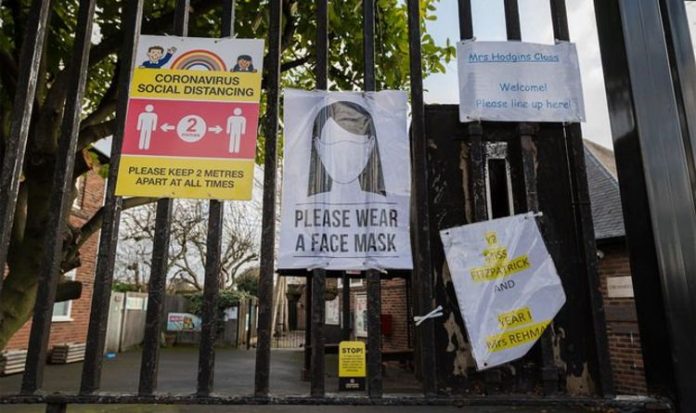 Boris Johnson will likely announce plans to reopen schools on March 8 after two months closed, with a phased return to the classroom planned for children. Under proposed plans being drawn up by the Government, parents of secondary schools students will be asked to carry put lateral flow tests (LTFs) twice a week.

The proposed plan sees parents asked to test their children twice a week throughout term time.

According to the proposal, schools will only carry out mass testing of secondary students once at the start of term with LTFs being used afterwards.

Secondary schools will be allowed to stagger the return of year groups to ensure every student receives a coronavirus test.

For larger schools, the phased return of Year 7 to 11’s may take up to two weeks.

READ MORE: Covid roadmap: How can schools go back to normal?

The proposal, shared by the Telegraph, is a compromise between ministers and teachers, with unions initially saying mass student testing was “inoperable” and “ridiculous”.

The Association of School and College Leaders (ASCL) previously endorsed parents carrying out tests on their children to prevent schools becoming “field hospitals”.

Geoff Barton, ASCL general secretary, said: “We think that is a good idea.

“It reinforces the responsibility for families rather than assuming that bits of the state, like schools, will carry out the tests.”

It comes ahead of the Prime Minister laying out a “roadmap” out of the third coronavirus lockdown on Monday.

Mr Johnson said on Monday during a coronavirus press briefing: “Next week I will be setting out a roadmap saying as much as we possibly can about the route to normality even though some things are very uncertain.

“Because we want this lockdown to be the last. And we want progress to be cautious but also irreversible.”

The third lockdown has been in place since January 4, after daily cases and deaths surpassed those recorded during April last year.

Yesterday saw the UK record a further 12,718 cases and 738 deaths within 28 days of a positive coronavirus test.

The UK achieved its first vaccine milestone this weekend, with more than 15 million people offered their first dose of a coronavirus jab.