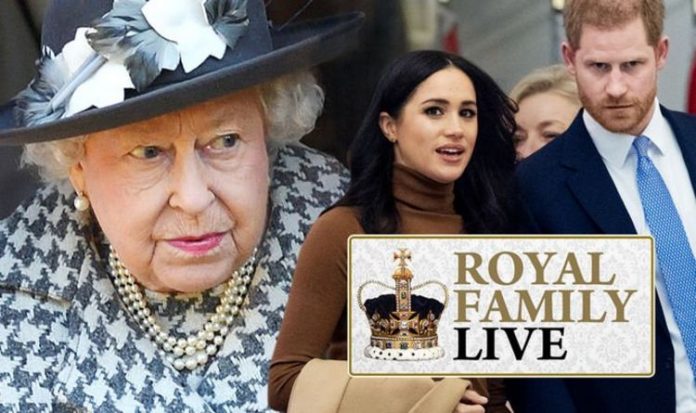 The Duke of Sussex’s military honours are expected to be passed on to other members of the Royal Family next month. And Harry and Meghan Markle are both expected to lose their official royal patronages – although they will keep their personal ones. After settling into a new life for himself in the US with wife Meghan Markle and son Archie, he has become more distanced from the units over the past year.

Harry was previously said to be hoping the 12-month review would clear their air after he was devastated to learn he would lose his titles.

But Daily Express royal reporter Richard Palmer has now warned the prince was growing furious at the Queen’s plans after he promised he wouldn’t “embarrass” Her Majesty with his new venture.

Mr Palmer wrote on Twitter: “The Sussexes are suggesting they won’t embarrass the Queen but Oprah won’t want her big interview to be a letdown.

“Interesting times at the palace.

“Harry is not happy about the Queen’s plans to strip him and Meghan of all patronages she has handed to them.”

Meghan and Harry retained their HRH styles after they stepped down last March, but they do not use them.

Authors Omid Scobie and Carolyn Durand wrote in Finding Freedom: “Harry’s lifelong commitment to the military was why the Mountbatten Festival of Music three days later was a particularly difficult moment; he was set to wear his Captain-General of the Royal Marines uniform for the very last time.

“During a conversation backstage, on arrival, Harry told Major General Matthew Holmes; ‘I’m devastated that I am having to step down.’ It was so unnecessary’, Meghan later told a friend of the decision to strip Harry of his military honours.”