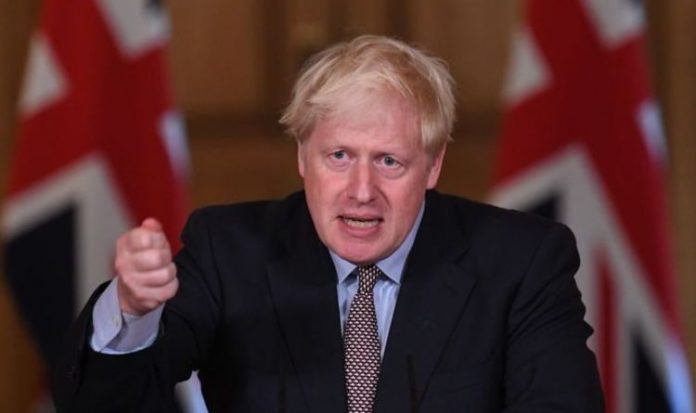 Prime Minister Boris Johnson is grappling with how to curb the effects of the economic fallout caused by the coronavirus pandemic. It is thought that the bailouts implemented over the lockdown period have racked up a £300m government debt. Chancellor Rishi Sunak was quick off the mark at the beginning of the national crisis to ensure workers around the country managed to survive.

He devised the furlough scheme which ensured workers around the country survived despite not being able to work.

He has since employed other schemes, such as the Eat Out to Help Out programme, which saw many restaurants slashing 50 percent off their food, in a bid to reopen the economy.

Drastic measures were required early on to protect the UK, such as the 329-page emergency bill that was passed at an unprecedented pace.

It gave the Government wide-ranging powers unlike any other recent legislation.

Boris Johnson: Some warn it is ‘quite likely’ the PM will continue to intervene in public life (Image: GETTY)

Power over things like immediate border closures and mass business shutdowns were handed over to Mr Johnson and his cabinet.

The speed at which the Government has managed to thrust its hand into public life has led many to question how willing it will be to ease its grip once the pandemic is over.

Mark Littlewood, the director general of the Institute of Economic Affairs (IEA), told Express.co.uk it was “quite likely” that the Government would continue to be heavily involved in the everyday lives of Britons – even after the pandemic is over.

He said: “The bit that worries me about the legacy of COVID, from a free market angle, is the history of wars.

JUST IN: Boris told to stand firm over Brexit gamble after US warning

“I wouldn’t quite compare COVID to a war, but its during a crisis, when the Government extends its powers and its role in society, possibly for very good reasons, that it proves very difficult for the Government to get its tentacles out of the areas that its put them into – even when there is a return to normality.

“The biggest growths in the British state’s role in the economy came in the aftermath of WW1 and WW2 – having had such state power during the national crisis of a war a lot of that was retained.

“My nervousness is not so much about the economy and whether it matters if people work from home or money being spent on different retail sectors; all of that is a discovery process and is manageable and encouraging, it’s all part of the creative destruction of capitalism which is what moves us forward.

“My worry is that the Government will continue to be very heavily involved in our lives even when that is no longer necessarily, and I think it’s quite likely that this will happen.”

Eat Out to Help Out: Many schemes have attempted to encourage the public to spend more money (Image: GETTY)

UK high street: Many businesses have relied on the furlough scheme to pay their workers (Image: GETTY)

Some of the Government’s involvement in public life is beginning to fizzle out.

The furlough scheme is coming to an end on October 31, with the Eat Out to Help Out project already having ended.

Many petitioned for the dine-out programme to be extended.

The Government declined, however many restaurants have continued to offer discounts on food and drink.

Much of the lockdown restrictions previously observed had slowly been relaxed.

This was because the R number – the reproduction number – had lowered, between 0.7 and 1.

However, with the R number steadily rising across the UK, the Government has intervened and, earlier this week, announced that it planned to ban gatherings of more than six people from Monday 14 September.

The latest R number for the UK is currently between 0.9 and 1.1.

Brexit: The PM has the added task of negotiating the UK’s way to a successful outcome with the EU (Image: GETTY)

This is between a -1 percent to +2 percent growth for the country.

It is unclear at what point the UK would be totally released from all restrictions.

Many have noted that should it fall to a rate that allows the Government to fully lift all restrictions, the R number will likely just as soon rise again.

This would result in the much talked about “second wave”.