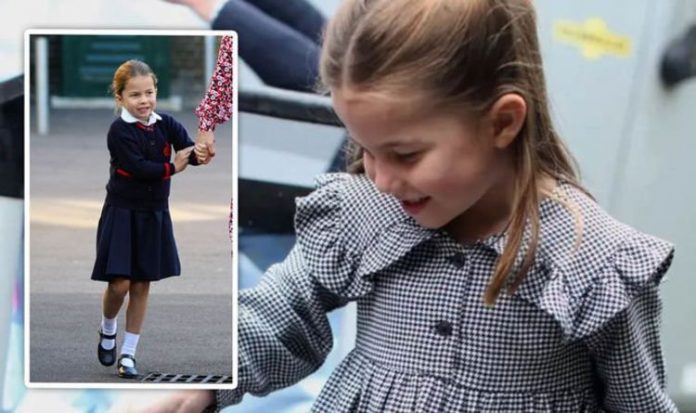 Princess Charlotte started Year 1 at her school, Thomas’s Battersea, this week. After a difficult Reception year, which saw the five-year-old spending much of 2020 being homeschooled by her mum Kate, Duchess of Cambridge, Charlotte is now to start learning key subjects such as English, History and Geography.

But on top of the core subjects every child needs to master, Thomas’s Battersea offers pupil on Year 1 also extra classes ranging from music to dance.

And it also features a fine hall for drama productions, which, if chosen by Charlotte, could see the outgoing princess step onto the stage in the future.

Prince William proudly revealed in March his daughter loves to dance, a preference which will likely see the little Cambridge take part in classes featuring a live pianist.

Speaking to attendees at a Commonwealth reception in March 2018, the Duke of Cambridge said: “My daughter Charlotte loves dancing”.

The Duke and Duchess appear to be cultivating Charlotte’s love for ballet and dance.

As Christmas 2018 was approaching, Kate took the little Cambridge to a special pre-rehearsal performance of The Nutcracker in London, at the Royal Opera House.

An onlooker who spotted mum and daughter among the crowd told People:

Princess Charlotte has been homeschooled by Kate during the spring (Image: GETTY)

“She looked so excited to be there and sat very still, watching the show.

“They were the only ones in the audience. It was very sweet.”

But Princess Charlotte isn’t the only member of the Cambridge family to be a keen dancer.

Princess Charlotte in a portrait taken to mark her fifth birthday (Image: DUCHESS OF CAMBRIDGE)

By starting Year 3, the third-in-line to the throne will be able to attend more extra classes this year, according to the school’s website.

Boys attending classes between Year 3 and 6 can join the school’s Phoenix Choir to perform a large repertoire.

But they can also participate in football matches, the swimming club and several outdoor activities.

Prince George’s passion for football has made him quite popular among his classmates, according to royal expert Katie Nicholl.

She told OK! magazine earlier this summer: “From what I’m told, he doesn’t get teased at school.

“Although he’s more introvert compared to his siblings, he’s an extremely kind little boy and has a gentle nature.”

Speaking about George playing football, the expert continued: “He’s also very impressive on the football pitch and before lockdown he was playing in an outside team regularly.

“The fact that he’s sporty and is a talented footballer has certainly boosted his popularity.”

Prince George is popular at his school (Image: GETTY)

Both Prince George and Princess Charlotte have been homeschooled by William and Kate at their home in Norfolk after Prime Minister Boris Johnson issued a nationwide lockdown in late March.

Opening up on their experience, Kate said in April she didn’t interrupt the children’s study regimen over the Easter holidays.

She said: “We don’t actually tell the children we’ve actually kept going through the holidays.

Visiting Northern Ireland to meet first responders and mark 999 day, the Duke said: “I think every parent is breathing a sigh of relief that school has started again.

“Five months – it’s been wonderful, but it’s been a long five months.”