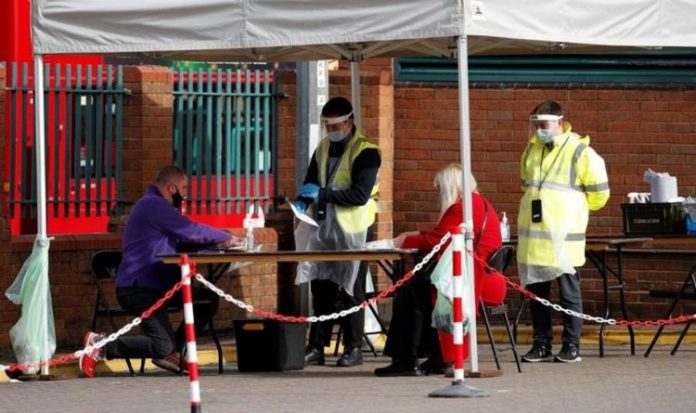 Professor Tim Spector, of King’s College, said while the number of COVID-19 cases remains high the country appears to be “heading in the right direction”. On Friday the UK declared 23,287 fresh infections and 355 coronavirus-related deaths.

Prof Spector said: “Although the number of new symptomatic cases is still high at over 40,000 daily, over the past week cases are heading in the right direction.

“The worst affected areas have shown the most improvement, but large differences between regions remain.

“So, while these population changes will take a while to work through, we believe they are a positive sign that we have passed the peak of this second wave.

“We urge everyone to respect the restrictions and help get the number of cases down as soon as possible to help the NHS, end the lockdown and get us in good shape for December.”

Data released by the Office for National Statistics (ONS) suggested the infection rate in England and Wales was on the decline before Boris Johnson ordered the shutdown.

But while the infection rate has increased in recent weeks, “the rate of increase is less steep compared with previous weeks”, the ONS said.

READ MORE: Could the Queen be forced to wear a face mask for the first time?

“The level of infection in young adults and older teenagers appears to have levelled off recently.

“However, they continue to be the most likely to be infected despite increases in all other age groups.”

The ONS concluded that England’s coronavirus infection rate appears to have “stabilised”.

READ  Webinar: All you need to know about submitting a successful application - 25th February 11am-12pm

Meanwhile the UK has introduced a mandatory 14-day isolation period for arrivals from Denmark.

The Scandinavian country has been hit by a major outbreak of COVID in its mink population.

Denmark is the world’s biggest producer of mink fur.

Authorities have said they will cull all its mink – as many as 17 million animals – following the discovery of a mutated form of coronavirus.

It is believed the virus was passed to animals in a fur farm from a human.

Ireland looks set to follow the UK in ushering in quarantine requirements for people arriving from Denmark.