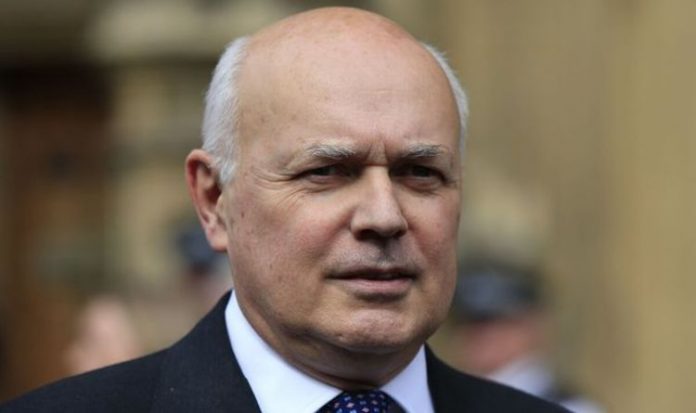 The former leader of the Conservatives has condemned the role of the Scientific Advisory Group for Emergencies (Sage) and has compared its independent recommendations for the Government to “commandments written on stone”. The Prime Minister announced a second lockdown in England during a press conference on Saturday evening after acknowledging the virus was “spreading even faster than the reasonable worst-case scenario of our scientific advisers”.

But Boris Johnson has been urged to reconsider his decision for the sake of the economy by Sir Iain, who claimed “the recommended cure will end up killing” people.

Writing in the Sunday Telegraph, he said: “The way that the Government’s Scientific Advisory Group for Emergencies has pressurised the Government into taking this decision has been unprecedented.

“Yet that system has broken down with Sage believing its advice to be more like commandments written on stone and its members publicly lecturing the Government over the airways when it disagrees.”

The backbench Tory MP urged Mr Johnson to widen his scope for advice and pointed to Dr David Nabarro, a World Health Organisation special envoy for coronavirus, who urged leaders against the use of national lockdowns.

The primary role of Sage is to provide scientific and technical advice to the Government with ministers ultimately making the final decisions.

Sir Iain added another national lockdown could have the opposite effect in suppressing the virus and in-turn weaken the country’s ability to tackle the outbreak.

He said: “My plea to Boris Johnson is simple, we cannot go on encouraging businesses to reopen only to force them to lock down again.

“The consequences of such a measure on the health of the economy are dire, and we need a strong economy to create the resources to fight COVID-19.”

The Prime Minister reluctantly pressed ahead with plans for a four-week national lockdown in England starting on Thursday, November 5.

Pubs, bars, restaurants and non-essential retail will close once again until December 2.

People will be allowed to exercise and socialise in public spaces outside with their household or one other person, but not indoors or in private gardens, and will be able to travel to work if they cannot work from home.

Mr Johnson said: “Unless we act, we could see deaths in this country running at several thousand a day – a peak of mortality, alas, bigger than the one we saw in April.”

The Prime Minister warned the potential overrunning of the NHS would be a “medical and moral disaster, beyond the raw loss of life”.

MPs will vote on the new measures in parliament on Wednesday ahead of their introduction at one minute past midnight on Thursday.