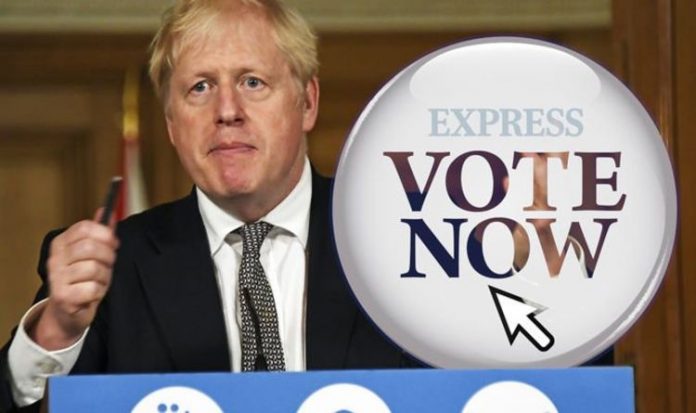 The Prime Minister made a dramatic U-turn on Saturday evening by announcing a four-week lockdown in England. The draconian restrictions will come into force from November 5 until December 2 – with pubs, restaurants, hairdressers and all non-essential retail stores shut down. Mr Johnson has reluctantly reverted back to the message in March of “stay at home, protect the NHS and save lives”.

The Prime Minister has come under widespread criticism from MPs and experts over his handling of the pandemic, ranging from being too slow to act at the beginning of the crisis, the availability of coronavirus testing and financial support for business.

Most recently, Mr Johnson came under fire for ignoring his own scientific advisers.

On September 21, the Scientific Advisory Group for Emergencies (SAGE) recommended a two-week circuit-breaker lockdown for the middle of October.

The Government went on to shun the proposal in favour of a three-tier localised approach – which has since failed to control the virus and sufficiently reduce the rate of transmission.

Labour leader Sir Keir Starmer, who called for the Sage advice to be implemented over the autumn half-term, has warned people in England will now see the “cost to that delay”.

Speaking on BBC’s Andrew Marr show, he said: “The lockdown now will be longer, it’ll be harder, we’ve just missed half-term and there’s a very human cost to this.

“On the day that Sage recommended a circuit-break, the daily death rate was 11, yesterday it was 326, so there’s a very human cost to this, but the measures are necessary.”

At yesterday’s press conference, Mr Johnson defended his approach and said “no responsible Prime Minister can ignore” the rising rates of coronavirus infections.

Mr Gove added: “We want to be in a position where we can – and I believe that this is likely to be the case – have an approach where if we bring down the rate of infection sufficiently we can reduce measures nationally and also reduce measures regionally.

“Because the regional approach is one that, wherever possible, we want to take because again we recognise it may be the case in the future that having reduced R below one, having reduced national restrictions, we may see a specific upsurge in specific areas which will require specific regional measures.”