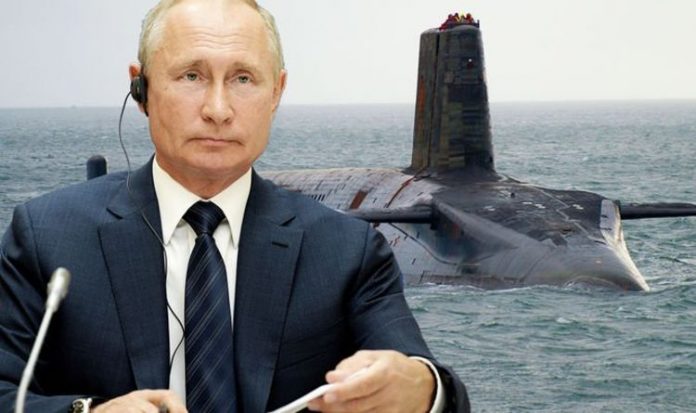 The unmanned “spy boat”, powered by solar energy, is feared to be a part of Vladimir Putin’s espionage programme. The autonomous vessel was found off the coast of Scotland last month, it has now been revealed, and was designed for stealth so as to avoid detection by UK based surveillance sensors. Russia has yet come forward to claim it as their own.

Now a British naval unit has deployed underwater drones off the high-security base at Faslane where the UK’s Trident nuclear deterrent is based.

UK surveillance devices have been placed around the Clyde estuary where the Trident submarines travel to the open sea.

UK defence chiefs are concerned Russia may have acquired the “acoustic signature” of Britain’s submarines.

If Russia acquires this “signature” they can track the UK’s submarines throughout the world.

A UK defence expert told the Mail on Sunday: “Capturing the acoustic signature is quite the prize in the cat-and-mouse game of submarine hunting.

“The Russians know our four Trident boats are a potent threat and knowing exactly what they sound like can help pick them out in a noisy ocean.”

Russia has deployed an increasing amount of submarines throughout the world’s maritime regions.

NATO has observed increased activity from Russian submarines in the Arctic.

The news comes after a British nuclear submarine was at the centre of a coronavirus outbreak after it was stationed in the US.

The UK’s HMS Vigilant reported more than 35 of its crew members tested positive for coronavirus.

The crew members may have contracted the virus after several left the King’s Bay US Navy base in Georgia for an outing.

A quarter of the vessel’s team has now tested positive for coronavirus.

No deaths have been reported from those who were infected.