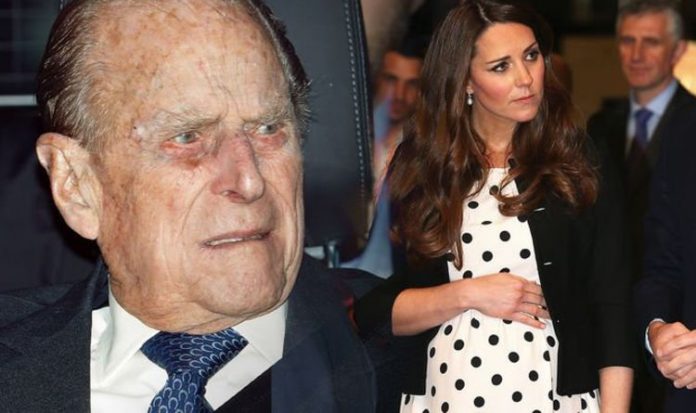 Kate’s husband Prince William is incredibly close to Philip, describing his grandfather as a “legend” for his work in promoting the Royal Family. Their bond was forged in the early part of William’s life when Philip helped guide the young prince through the aftermath of his mother Princess Diana’s death. But surprisingly there is another connection that links William’s wife, the Duchess of Cambridge, and the Duke of Edinburgh.

While suffering from hyperemesis gravidarum, an acute form of morning sickness, the Duchess was forced to spend around four days inside London’s King Edward VII Hospital.

This was the same hospital that treated Prince Philip for an infection which came as a result of a previous condition.

The fact she was at the same hospital where Prince Philip was treated incredibly well would have been a relief to both.

In 2017, concerns were raised when Philip was hospitalised at the age of 97 – yet his son Prince Charles later confirmed his father was “getting better”.

The BBC’s royal correspondent Peter Hunt added: “Given that he is being treated for a pre-existing condition, it is safe to assume that he is suffering from a reoccurrence of a bladder infection that laid him low on two occasions in 2012.

“He is not bedridden, according to officials, but up and about inside the private hospital.

“Philip’s current good mood may be tested if, as was the case five years ago, he remains an in-patient for several days.”

Kate was rushed to hospital when pregnant with Prince George in 2012, with William reportedly driving around 50 miles to get treatment for the Duchess.

JUST IN: Meghan Markle and Kate Middleton could meet at celebrity wedding

A spokesman for the Royal Air Force, which William served as a search-and-rescue pilot at the time, added: “The RAF is delighted with the news and wishes the Duke and Duchess of Cambridge all the best for the future.”

Panic engulfed insiders at Buckingham Palace at the time as her sickness, as many were concerned her appearance in hospital could lead to speculation surrounding whether she was pregnant.

So, despite only being around 12 weeks pregnant, St James’ Palace made the announcement to the public confirming her pregnancy, with other members of the Royal Family only finding out hours before.

A week before Kate’s pregnancy was confirmed, William sparked reports she was expecting after he accepted a baby romper suit from a member of the public in Cambridge.

The outfit had the words “Daddy’s little co-pilot” emblazoned on it, as well as a picture of a helicopter.