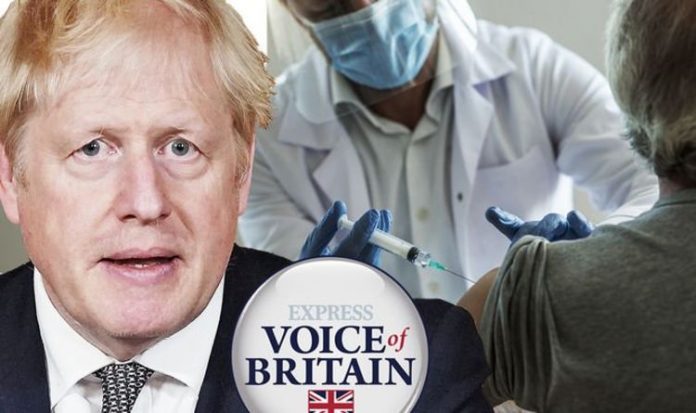 The Prime Minister admitted today that it will take months to inoculate everyone that needs a vaccine. He added Christmas will be the season to be “jolly careful” as England’s lockdown will be lifted on December 2, with the a tiered system then being introduced. Mr Johnson added that with a “favourable wind”, most of the people in need of a vaccination could get one by April, as the Oxford-AstraZeneca team said its jab has proved to up to 90 percent effective.

It comes after Pfizer and BioNTech submitted their vaccine for approval to the US Food and Drug Administration last week.

They said they are ready to administer the vaccine within 24 hours of getting the green light.

Express.co.uk readers were asked between 11.32am and 9.36pm today whether lockdown should be lifted completely once elderly people receive the COVID vaccine.

Only 515 (33 percent) voters disagreed that lockdown should end once older members of society are vaccinated.

And 50 people (two percent) said they did not know.

Many readers also shared their thoughts on why lockdown should end following the distribution of a vaccine.

One person wrote: “As soon as those over 60 are vaccinated it should be safe to go back to normal.

“If not we will be in and out of lockdown for another year.”

Mr Johnson made the announcement today while speaking on a video link at a Downing Street press conference, as he is in self-isolation.

He said: “We can hear the drumming hooves of the cavalry coming over the brow of the hill but they are not here yet.

Mr Johnson added it is “not the moment to let the virus rip for the sake of Christmas parties”, as he said it is “the season to be jolly careful, especially with elderly relatives”.

He added: “Let’s be clear, there will be no compulsory vaccination. That’s not the way we do things in this country.

“We think it’s a good idea and I total reject the propaganda of the anti-vaxxers. They are wrong.

“Vulnerable people, people in need of a vaccine should definitely get vaccine.

“And everybody should get a vaccine as soon as it is available, according to the advice of JCVI (Joint Committee on Vaccination and Immunisation).

“We should be very very pro vaccine.”