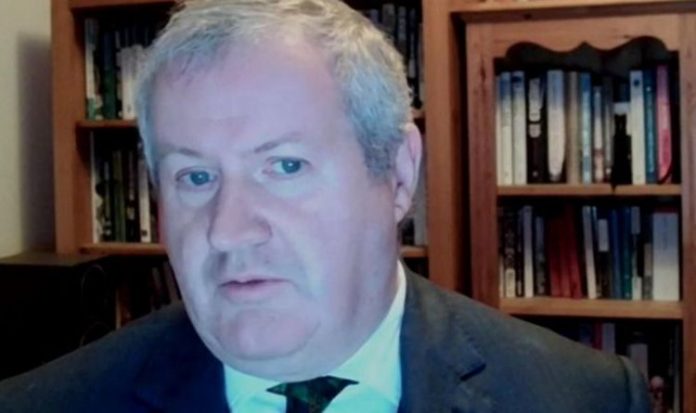 The SNP Westminster leader had to issue an apology and delete a tweet after sparking outrage with his unsubstantiated allegations. Scottish Lib Dem leader Willie Rennie accused Mr Blackford of stoking anti-English sentiment in Scotland with his ill-judged remarks and there was a ferocious backlash on Twitter.

The extraordinary row broke out when Mr Blackford took to social media to criticise photographer Ollie Taylor who had posted a stunning image of the northern lights he had taken from Caithness in the far north of Scotland.

Commenting on the picture, Mr Blackford said: “As you live in the south of England and travel to Scotland is only for permitted reasons I am sure there will be a valid reason as to why you are posting a photo from the north of Scotland last night?”

But he was forced to remove the tweet and issue an apology when it emerged Mr Taylor actually lived in Scotland after moving there to work on locations for a new photography book.

Mr Blackford said: “I will continue to stand up for my constituents who frequently raise these concerns with me but I recognise that it was wrong to query an individual on Twitter and I apologise to @OllieTPhoto for my earlier post, which I have deleted.

“As the local MP for Ross, Skye and Lochaber I know my constituents feel very strongly about the breaking of travel restrictions that we see across the highlands and islands, which puts people’s lives and our public services at risk.”

But the original tweet was seized up by critics of Mr Blackford and the SNP.

Mr Rennie said: “Ian Blackford should apologise immediately for this blundering tweet which accused a private citizen of breaking the travel restrictions when he had no evidence of him doing so.

“Blackford, a senior politician, has picked on him and bullied him because he thinks he’s English.

“Other people on Twitter have shown that Blackford is wrong to accuse this private citizen.

“Ian Blackford has form for his remarks about people from England who happen to be in Scotland.

“This behaviour could only add to the problems of anti-English sentiment in Scotland.

“I have warned that this must be condemned but Ian Blackford is only making it worse.”

Another said: “Would Mr Blackford fall foul of Humza Yusaf’s hate Bill? A public figure creating hostility towards someone for political gain?”

And another tweeted: “Oh dear, Ian Blackford has chosen to delete his malevolent and aggressive threat to a normal law abiding bloke living his life.