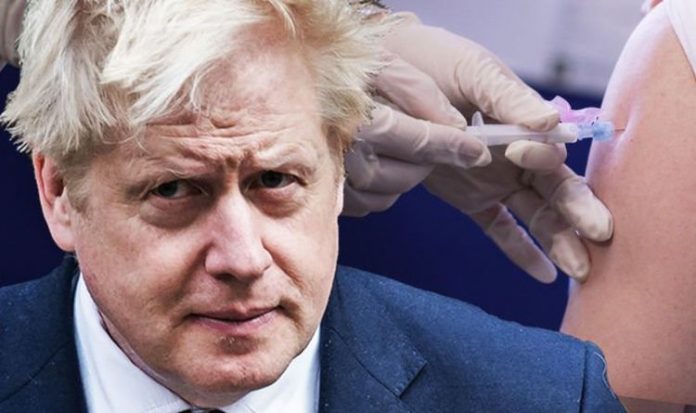 The Government has confirmed the UK has deals in place to administer the drug produced by Pfizer and BioNTech and Oxford University and AstraZeneca. Armed with the doses, it is unclear if the Government will make vaccination mandatory, with some MPs such as Tom Tugendhat, claiming people who refuse the drug could be banned from returning to work or entering hospitality venues. Speaking to Express.co.uk, Tobias Ellwood, Conservative MP for Bournemouth East and chair of the Defence Select Committee, claimed there could be violence on the streets if vaccination was made compulsory.

He said: “I think we’re getting into some tricky waters if we go for compulsory vaccination.

“I think the majority of people are aware of the game-changing significance of a vaccine and would be pleased to receive it.

“I fear that we don’t have the disciplinary resources to make this a compulsory vaccine.

“I think we would end up with crashes.”

The Pfizer and Oxford University drugs are considered to be the leading vaccinations for the UK, although there is large price difference between the two.

The UK Government has 100 millions doses of the Oxford University drug, valued at £2.23, but just 40 million of the Pfizer drug which is valued at close to £30.

Despite the discrepancy in price, Mr Ellwood claimed the Government must solely concentrate on saving lives.

However, in a word of warning to the Prime Minister, both MPs also insisted the UK cannot afford a third or even fourth lockdown.

Instead, they called for the Prime Minister to return to a new tiered system with the inclusion of a fourth level.

Mr Longhi said: “I think he would be extremely reluctant to return to a third lockdown.

“So I think the sentiment will be very much to look at sort of regional system and perhaps more severe forms of regional tearing where maybe we saw an acceleration of the spread of the disease.”

Mr Hollinrake added a “more extreme fourth tier” would be a solution to stop the public travelling from different areas.

He said: “The problem with the tier system is Tier 1 doesn’t do much at all, Tier 2 probably has some effect, but not a great deal, and Tier 3 seems to be able to hold the epidemic.”