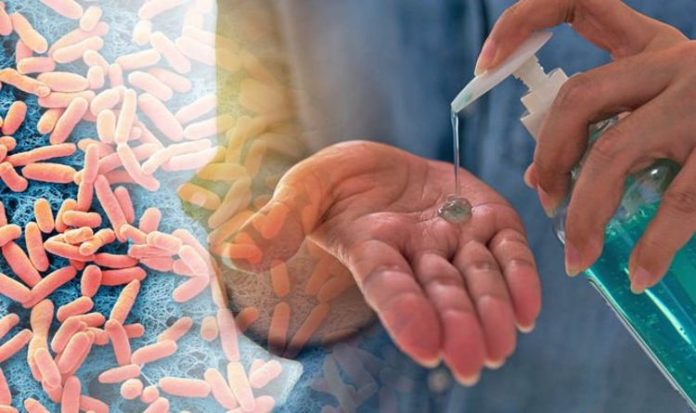 Dr Andrew Kemp, Head of Scientific Advisory Board on the British Institute of Cleaning Science, said alcohol based hand gels have still not been proven to kill Covid-19 on skin. But the Lincoln university academic said overuse of the gels will allow other bugs – commonly found on our hands – to learn how to survive them. If antibiotic resistant superbugs adapt to survive alcohol it could lead to an “armageddon situation”, he warned.

He stressed that hand hygiene was vital to deal with the spread of Covid, and hand washing was a powerful weapon. But he warned that even the most potent sanitisers do not destroy every single bug, potentially giving rise to more problems.

The surviving bacteria would be resistant to alcohol and potentially far more harmful.

His research, published in the American Journal of Biomedical Science and Research and to be presented at a leading conference on superbugs, this autumn is likely to raise alarm among public health officials who have been advocating widespread use of gels to combat the spread of the disease.

Hand sanitisers sold out across the world in the early months of the pandemic and are now routinely used by the public as well as being given out to shoppers and those visiting public places.

Dr Kemp, who has authored 22 papers on sanitisation over the last three years, said gels should no longer be so heavily relied on to help tackle the covid-19 pandemic.

Hand gel use could breed a coronavirus superbug (Image: Getty)

Efforts should instead be focused on encouraging handwashing, where bugs are rinsed away with water.

He said: “Hand gels should only be used as a last resort and as a short term temporary measure or stop gap if soap and water are not available.

“Claims on many hand gels that they kill 99.9 percent of bacteria are misleading. I am not aware of any hand sanitiser that has been tested against all species of bacteria. What they actually mean is that they kill 99.9 percent of the bacterial species they tested against. At the moment there is no published proof that alcohol gels killed Covid-19 itself.

“Even if they did kill 99.9 percent of all bacteria, there can be more than a million bacteria on your hands at any one time leaving 10,000 alive after sanitisation. These will be in a residue of sugar and protein. “Some species of bacteria can thrive on this.

“Recent research shows the surviving bugs which are not killed by alcohol gels are themselves highly dangerous pathogens and may increase in numbers. This means our routine use of gels could ultimately cause us more harm than good.”

The World Health Organisation recommends washing hands regularly with soap and water. It suggests using an alcohol-based handrub “if you don’t have immediate access to soap and water”.

Alcohol such as isopropanol dissolves the fatty membrane that surrounds each bacterium. Without these protective walls their proteins fall apart and they die.

The WHO has suggested that there is no proof that sanitiser leads to superbugs. But studies, including one in 2018, have shown bacteria are becoming increasingly resilient to alcohol.

Dr Kemp added: “We come into contact with bacteria and viruses every day of our lives, our immune systems fight them off, so we don’t even realise it most of the time.

“Over using disinfectants in this way will be a key factor in leading us to a potential armageddon scenario, widely accepted by scientists, that over the next two or three decades we will no longer be able to safely perform routine operations such as hip replacements because we have multi disinfectant resistant bacteria alongside our antibiotic drug resistant bacteria.

“Not only are we increasing the risk of these problems across the globe by overusing hand gels, we may also not be doing anything against the spread of Covid-19. It seems pointless spending billions on antibiotics, if the resistance to them comes from poor use of chemical disinfectants and hand sanitisers.”

He blamed part of the problem on the fact there has been little funding available for the development of new disinfecting chemistries and also limited research in funding in test methods for surfaces and skin sanitation.

Dr Kemp will present his findings at the International Conference on Antimicrobial Resistance conference in Amsterdam next October.

READ  Competition opens for new wave of Institutes of Technology

He said the use of sanitizer and frequent handwashing is a “recognised risk of active eczema which moisturizer cannot repair effectively.”

Research into hand gels is ongoing.

Scientists recently developed a new hand and surface disinfectant which is based on hypochlorous acid – part of the body’s own immune system. Bright Water is believed to kill viruses and bacteria without increasing the risk of resistance.

A Department of Health spokeswoman said: “The most effective means of preventing the spread of this virus remains to stay alert, follow social distancing rules, wash your hands regularly and wear a face covering in enclosed public spaces.”