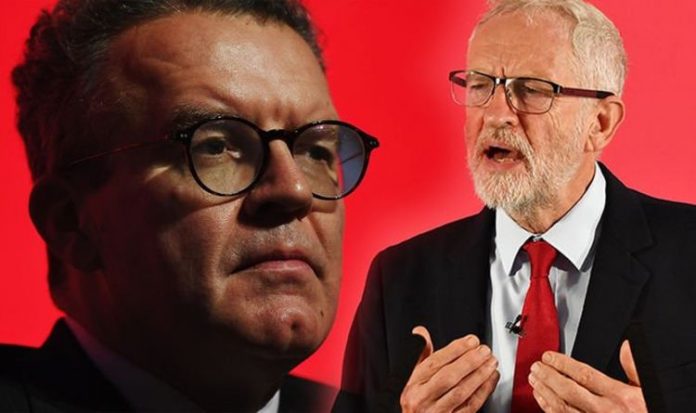 Just five months after Mr Corbyn officially stepped down as Labour leader, a new book has revealed the conflicts and tensions within the party during his tenure. Written by The Times journalists Gabriel Pogrund and Patrick Maguire, ‘Left Out: The Inside Story of Labour Under Corbyn’ describes the behind-the-scenes dramas of the Islington North MP’s four-year rule, which culminated in December with Labour’s worst election performance since 1935. One of the most contentious revelations made by the journalists was that Mr Corbyn failed to stamp out antisemitism in the Labour Party because he could not empathise with “relatively prosperous” British Jews.

As the row continues, unearthed reports shed light on other controversial episodes that have characterised Mr Corbyn’s time in office.

In 2016, Labour’s civil war entered a bitter new phase when Mr Corbyn’s deputy Tom Watson warned the party risked being taken over by hard left activists driven out in the Eighties.

Mr Watson sent Mr Corbyn’s office a four-page document, based on publicly available information, detailing what he said was evidence that Trotskyists had been attending meetings of grassroots pro-Corbyn Momentum groups and seeking to influence the Labour leadership election.

He claimed some of the individuals involved were members of other parties, including the Socialist party, the successor to Militant.

Its members were expelled from the Labour Party by former leader Neil Kinnock.

The evidence included reports from the Socialist party’s website of its members addressing Momentum rallies and tweets from an activist expelled from Labour earlier that year who was said to to be running phone banks backing Mr Corbyn in his leadership race.

Mr Watson’s letter was a riposte to the accusation made by Mr Corbyn’s campaign that he was “peddling conspiracy theories” after he said in a Guardian interview that Labour was at risk from “Trotskyist entryists”.

Mr Watson wrote: “It’s not a conspiracy theory to say that members of these organisations are joining Labour.

The Socialist Party’s leader Peter Taaffe, a founder member of Militant, told the Guardian he had hoped to be readmitted to the Labour Party.

He said Mr Corbyn was opening Labour up “to all strands of socialist and working class opinion” and rejecting control of the party by a “top-down, centralised elite”.

He added: “The lava of this revolution is still hot.”

Mr Taaffe added: “[Watson] is referring to entryists, but we were not entryists, we were born in the Labour Party, and we were expelled because we fought Thatcher in Liverpool and defeated her.”

He insisted Labour MPs critical of Mr Corbyn could not “stop the winds of history as they’re developing at the moment”.

A spokesman for the former Labour leader responded to Mr Watson’s claims, saying: “It’s absolute fantasy and, if this is the way they want to characterise new Labour Party members, then it’s not going to do them any favours in the leadership contest.”

He added the party’s policy on refusing to allow members of other parties to join Labour had not changed.

Mr Kinnock’s victory over Militant in the Eighties is regarded as a key moment by both wings of the Labour party.

Mr Corbyn’s victory in the 2015 leadership election, and the resulting decisive shift towards the left, had raised hopes among some of those excluded then of being readmitted.

Mr Watson insisted he believed many members of the rapidly expanding Labour Party and the pro-Corbyn group Momentum were “genuine in their desire to campaign vigorously against Tory inequality”.

However, he added: “There is no denying that tightly organised factions are also organising within Momentum and the party.”