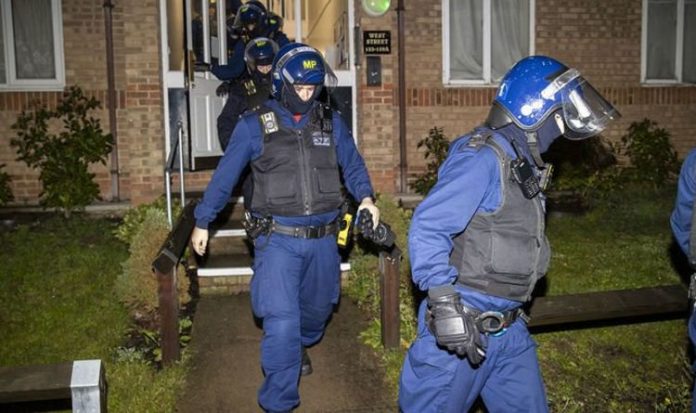 Children as young as 14 had been recruited as mules to move Class A drugs for crime lords in what has become a deeply disturbing and fast-growing phenomenon. County lines gangs exploit children to ferry drugs from cities and towns to rural areas – typically targeting those living in care or trapped in poverty to take advantage of their vulnerability. Youngsters are often groomed, threatened or tricked into trafficking drugs. Some recruited at school gates have been blackmailed and sexually abused.

The major operation – carried out as Britain reeled from the Covid crisis – identified 33 county lines running out of south east London and saw 53 people – 47 men and six women aged between 16 and 48 – arrested on suspicion of offences including possession of firearms and ammunition, supply class A and B drugs, possession of criminal property, possession with intent to supply and possession of offensive weapons.

They also confiscated firearms, ammunition, knives and knuckle dusters, two vehicles worth £45,000, and £40,000 worth of Rolex watches, all believed to be the proceeds of crime.

DI Jo Gresham, who ran the operation, said: “County lines are the biggest growing issue we have got. A lot of high-risk missing children recruited are females who when they are sent to carry drugs get raped or something else utterly terrible happens to them. These are children. They are often filmed and then completely beholden, but running scared. These are children who are being massively exploited. We want to safeguard them and bring offenders to justice.”

The Daily Express was granted unprecedented access to dawn raids carried out at addresses across southeast London, Kent and Thames Valley.

We joined CID officers on an early morning raid in Erith and Thamesmead which saw teams from the Met’s Territorial Support Group, or riot police, smash in front doors and drag suspects away.

The warrants were the culmination of a meticulous undercover operation that started in January and saw officers identify and mingle with individuals involved in organised criminal networks, supplying class A drugs across south east London and beyond.

Detectives said the operation was worth every penny but its painstaking work was like painting the Forth Road Bridge.

DS Dan Ord, of the Met’s South East Proactive Unit, said: “The people who we put in prison from the last operation a couple of years ago will be coming out soon, so they’ll probably be taking over the territory these guys have just lost, so it ever evolves. But it’s vital we carry out this work because as a parent of kids the same age the thought of them mixing with these people and doing what they are doing is deeply worrying.

“You have now got kids recruiting from schools, standing outside the gates saying, ‘how do you fancy making some easy money’. And these people then have images of [the recruited children] doing horrible things – young girls who wouldn’t ever want to tell their parents – so they are like, ‘that’s on my camera, pal, so guess what you’re doing now – you’re now a drugs mule, you are now carrying drugs into the counties. This is the way they get these people. It’s everywhere. And if I can put someone in prison who might tomorrow be outside my kids’ school gate recruiting for a county line, then it’s well worth it.”