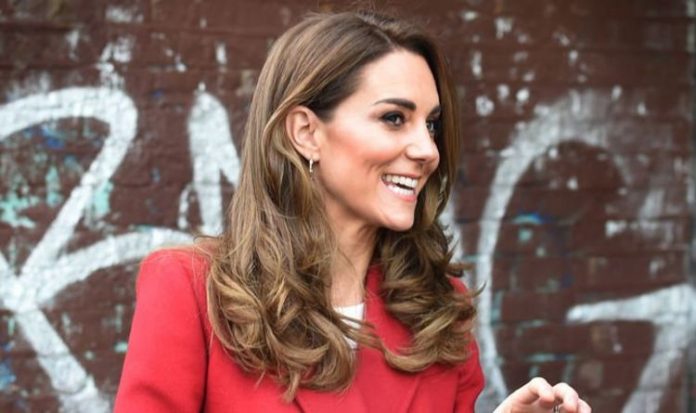 The Duchess was snapped wearing designer Grace Han’s Love Letter handbag while meeting finalists for her Hold Still photography project. Royal commentators noted the special significance of the designer handbag, which has a nod to a history of romance. It follows experts suggesting the Cambridge royals are a model couple, with the pair being affectionate and open.

The handbag costs £1,595, the brand described the bag by saying: “Its distinctive envelope closure is an ode to love letters of the past, present and future.”

On Grace Han’s website, they delve more into the meaning behind the Love Letter range, adding it is a “collection of handbags and leather accessories inspired by love in all forms”.

After Kate debuted the new piece, Grace Han were quick to share a picture of the Duchess with the caption: “HRH The Duchess of Cambridge carrying her new Grace Han Love Letter bag.”

The Duchess paired the Taiwanese-British designer bag with a red knee-light coat from Alexander McQueen.

The new look came just ahead of the Cambridges’ appearance for the Duchess’ photography project, which Kate started during lockdown.

Brits submitted more than 31,000 images for the project, with the 100 finalists having their work displayed online as part of a digital exhibition.

Kate said of Hold Still: “I felt really strongly that I wanted to try and create a portrait of the nation, that captures the fears and the hopes and the feelings of the nation at this really extraordinary time.

“As a record, I suppose, for the years to come.”

The Cambridges have long been touted as lovely examples of romance by royal experts.

Royal author Ingrid Steward also said in the Telegraph: “Becoming a parent has mellowed him. William has always had this ability to connect with people.

“I remember from some of his earliest engagements how much he reminded me of Diana. He’s very natural and not at all fake.”

In March this year, William gushed about Kate to a royal fan in Galway, Ireland.

Angela Moran, from Westport, County Mayo, told Town and Country magazine of her chat with the Prince about his wife.

She said: “I said to him that I really admired him and Catherine and he said thank you very much.