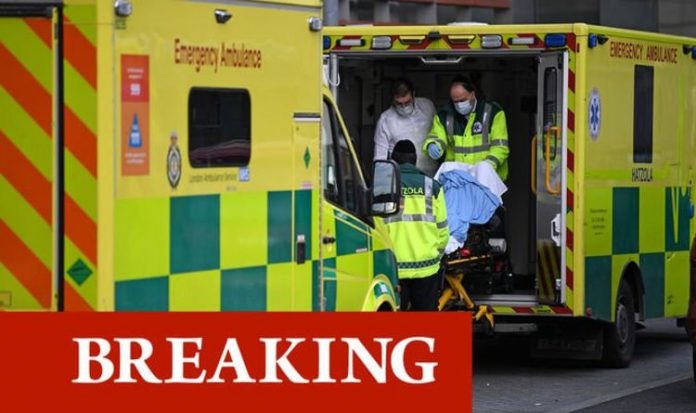 The UK also confirmed 592 deaths from coronavirus, down from Sunday’s figures of 610.

During the announcement, the UK also confirmed that 6.6million people have received their first dose of the Covid-19 vaccine.

Some 470,478 were second doses, an increase of 818 on figures released the previous day.

According to the seven-day rolling average of first doses given in the UK, the figure is now at 358,724.

The Government plans to issue the first dose of the vaccine to 15 million people by February 15.

But based on the latest figures, an averag of 401,259 doses of the vaccine will be needed each day to hit the target.

As of January 22, the R rate was estimated at around 0.8 to 1 with a daily infection growth rate range of -4 percent to -1 percent according to Government figures.

This silver lining comes just hours after Boris Johnson quietly gave the go-ahead for coronavirus lockdown laws to be extended until July.

According to the Daily Telegraph, the new measures will allow local councils across England to enforce the closure of pubs, restaurants and public spaces until at least July 17.

When the Prime Minister announced the third lockdown in England at the start of January, he said that the situation would be reviewed in mid-February.

However, during a visit to Didsbury in Greater Manchester last week, Mr Johnson appeared to cast doubt that lockdown restrictions would be eased any time soon.

He told reporters: “I think it’s too early to say when we’ll be able to lift some of the restrictions.”

Asked about the mid-February target, he said: “We’ll look then at how we’re doing but I think what we’re seeing in the ONS [Office for National Statistics] data, in the React survey, we’re seeing the contagiousness of the new variant that we saw arrive just before Christmas – there’s no doubt it does spread very fast indeed.

“It’s not more deadly but it is much more contagious and the numbers are very great.”

The UK has been one of the worst hit countries following the outbreak of the coronavirus pandemic.

Over recent months, three new strains of the virus have been detected in the UK, Brazil and South Africa.

These new strains are believed to be more contagious than thee old strain and continue to spread at alarming rates around the world.