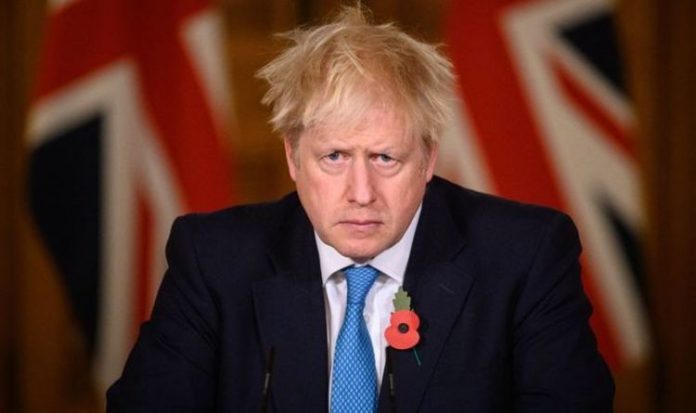 According to figures published by the Office for National Statistics, the number of new COVID-19 cases recorded last week was 12 percent lower than the previous seven days. On Thursday Britons were once again plunged into a nationwide shutdown, as non-essential shops were shuttered and employees placed back on furlough.

ONS data published on Friday indicates the Government’s three-tier lockdown system was having an effect on infection levels.

Around 45,700 people contracted coronavirus in the week from October 25 to 31.

And more than half the local authorities reported a fall in the number of positive test rates at the end of October.

But despite the release of today’s report, the Prime Minister resisted calls to cut short the lockdown, which is scheduled to expire in early December.

Mr Johnson’s spokesman said: “The lockdown is for four weeks to December 2.

“As we have said, the trend of hospital admissions is going up.

“We have introduced a second lockdown for the purposes of reducing the transmission of the virus.”

READ MORE: How to celebrate Remembrance Day from lockdown

He said: “The advice I have received suggests that four weeks is enough for these measures to make a real impact.”

Adding extra fuel to the pushback against the Government’s lockdown, Sage revealed the UK’s R rate has remained between 1.1 and 1.3 for two weeks.

No10’s team of scientific advisers also said the COVID infection rate dropped in five out of seven regions in England this week, ever before the lockdown was implemented.

The ONS data also showed fresh infections in England have stabilised at around 50,000 a day.

The body said: “Incidence appears to have stabilised at around 50,000 new infections per day.

“The infection rate has increased in recent weeks, but the rate of increase is less steep compared with previous weeks.”

That equates to an estimated 1 in 90 people, an increase in prevalence from 1 in 100 people the week before.

Experts said the infection survey was evidence the pandemic was slowing or even in decline, but that more data was needed to confirm the trend.