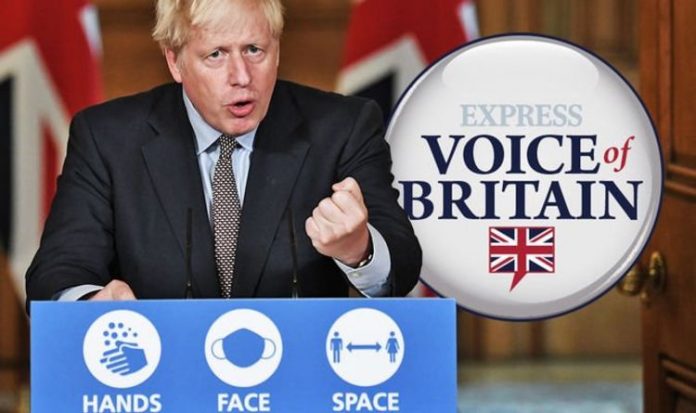 From today, no more than six people are able to meet indoors or outdoors in a bid to halt the spread of the pandemic but Westminster sources have warned a national curfew could be the “obvious next step”.

If a curfew is imposed, it would be for all ages with pubs and restaurants likely to be forced to shut at 10pm – and other venues having their doors closed.

Now, an exclusive Express.co.uk poll – which ran from 10.30am to 8pm on September 14 – asked whether the public would back a national curfew.

Readers were asked: “Would you back national curfew to halt spike in UK coronavirus cases?”

One reader said: “Yes, and do it now. Too little too late sums up the UK’s answer to everything.

“I thought Boris would be more assertive but it appears the fifth column in this Parliament appears to have got to him.

“There is no precedent here so he has a new field on which to play.”

“Deadly, it’s only deadly to those who are already seriously ill.”

Someone else pointed out the borders into the UK were never closed during the height of the pandemic.

They said: “National lockdown would only have worked with a complete stop to people flying in and out of the country.

“The virus enters the country by air and sea passengers, international travel was never stopped.

“So we wasted all of our time and money for nothing.

“The virus is constantly being topped up as people return to the country from holiday destinations and aren’t checked and don’t quarantine.”

In recent weeks, research has found younger people are spreading the virus faster than any other age group in the country.

The rate of infections for 20 to 29-year-olds has rocketed.

Justice Secretary Robert Buckland blamed the younger generation for forgetting social distancing rules and “getting together and enjoying themselves”.

Mr Buckland said the government would only implement a second lockdown as a “nuclear option”.

Speaking to the Daily Telegraph, a Government source said: “A national curfew is the obvious next step if the numbers keep rising despite all the steps we are currently taking.

“But we are not at that stage at the moment, and hopefully the action we are taking locally to contain outbreaks, where they occur, will mean we don’t have to go that far.”

Yesterday, a staggering 3,330 cases of coronavirus were reported across the UK.