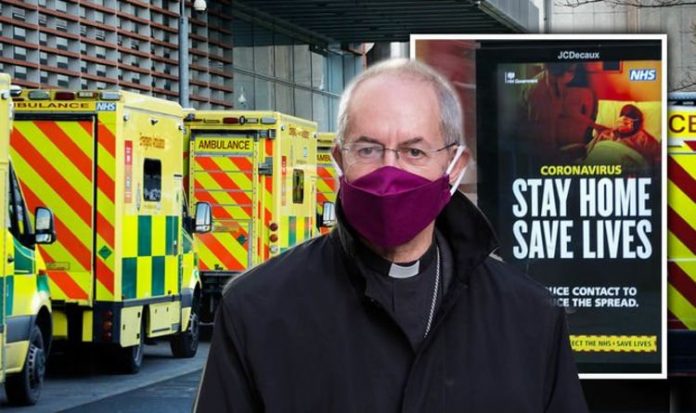 Covid-19 has wrought havoc on lives in the UK with strict national lockdown restricting people’s freedom of movement as thousands of businesses are at risk of going under thanks to enforced closures. On Tuesday, the total number of people who died within 28 days of a positive coronavirus test reached 100,162, marking the true extent of the tragedy of this outbreak. Now two of Britain’s top religious figures are calling for the nation to join together in a daily prayer to mourn and remember the victims.

Archbishop of Canterbury Justin Welby and Archbishop of York Stephen Cottrell are asking people to join in a “prayer for the nation”.

Regardless of whether you have faith or not, the figureheads have urged the public to reflect on the “enormity” of the pandemic in an open letter published today.

The Archbishops write: “100,000 isn’t just an abstract figure. Each number is a person: someone we loved and someone who loved us.

“We also believe that each of these people was known to God and cherished by God.”

READ MORE: GMB viewers in tears over tribute to 100,000 who died of Covid

They encourage anyone “who is feeling scared, or lost, or isolated to cast their fears on God”.

The letter also said poorer communities, minority ethnic communities and those with disabilities “have been afflicted disproportionately and cry out for the healing of these inequalities.”

The Archbishops acknowledged the challenges of lockdown measures, saying: “The necessary restrictions we live with have also prevented us from being alongside loved ones as they died, or even at their graveside. All grief profoundly affects us, but this pandemic grief is so hard.”

READ  Coronavirus test: Can you get public transport to get a test if you have covid symptoms? | UK | News (Reports)

But they add: “We show our commitment, care and love for one another by ensuring we do everything we can to stop the virus spreading.”

Labour leader Sir Keir Starmer said the milestone was a “national tragedy” and accused the Government of being “behind the curve at every stage”.

While Professor Calum Semple, who sits on the Government’s Scientific Advisory Group for Emergencies (Sage), predicts there could be thousands more deaths from coronavirus.

He warned: “It would really not surprise me if we’re looking at another 40-50,000 deaths before this burns out.”

On social media, the Prime Minister has come under intense criticism, with one user saying: “If you’ve been doing everything you can and 100,000 have died, you’re not just incompetent, you’re negligent.”

READ  UN Human Rights Council 46: UK statement for the Annual Discussion on Rights of the Child

Another added: “The buck has always and will always stop with the leader of the country. He dithered and delayed and was always a step behind everybody else in doing things which he eventually did after arguing those things were unnecessary. So yes, he’s definitely to blame for all of this.”

A third posted: “Boris Johnson and the Conservative government have absolutely failed the nation.”

One Twitter user said: “100,000 deaths in a year! I haven’t lost anyone to #COVID19 my parents are over 75 & chronically ill. I haven’t seen them in months. I’m in tears at the death rate & the personal stories. I’m angry at covid deniers, those that refuse to wear a mask & Boris Johnson #BorisResign .”

The UK is the fifth country to pass 100,000 deaths, behind the US, Brazil, India and Mexico.