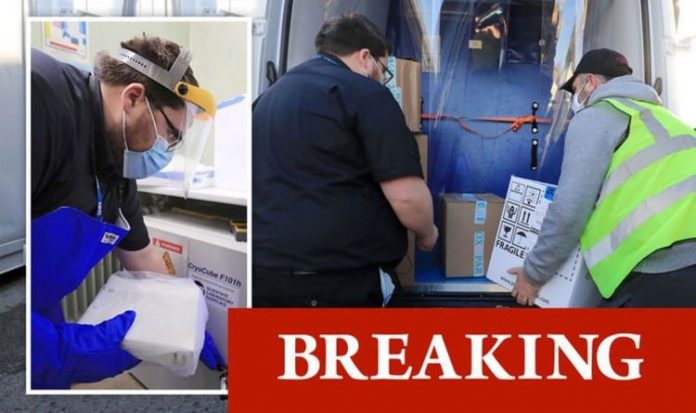 Boxes of the COVID-19 vaccine developed by Pfizer and its German partner BioNTech have been pictured arriving at Croydon University Hospital in south London. Employees wearing face masks, visors and gloves unpacked the vials and placed them in ultra-low temperature freezers. The vaccine has onerous storage requirements and needs to be kept at -70C and only lasts five days in a regular fridge.

For that reason, the health ministry said the vaccine would first be administered in 50 hospitals and that it would take a few hours to defrost each jab.

Britain is preparing to become the first country to roll out the Pfizer/BioNTech COVID-19 vaccine this week.

The deliveries on Saturday came just days after the UK’s medicines regulatory, the MHRA, judged the vaccine to be safe for use.

The first doses are set to be administered on Tuesday.

The Government has ordered 40 million doses of the Pfizer/BioNTech vaccine – enough to vaccinate 20 million people.

Each patient is given two doses of the jab.

About 800,000 doses are expected to be available this week alone.

The Government has said the shot will be available at hospitals before the service will be extended to GP practices.

NHS England has written to GPs, telling them to get ready to start giving vaccinations through local doctors’ services from December 14.

The first deliveries of the vaccine came as the UK and the EU enter the crucial final stage of post-Brexit trade talks.

Chief negotiators Michel Barnier and Lord Frost met in Brussels on Sunday to discuss a possible way forward towards a free trade deal.

If the pair fail to agree a deal, Britain will go down the no-deal route when the Brexit transition period ends on December 31.

Such a scenario would lead to major disruptions in the movement of goods between Britain and EU countries such as Belgium.

The Observer newspaper reported on Sunday that, under UK Government contingency plans, tens of millions of vaccine doses could be flown to Britain by military aircraft to avoid delays at ports caused by Brexit.

He told Sky News: “It won’t disrupt the vaccine.

“A huge amount of work has gone on to maintain the flow of goods at the border in the event of there being a no-deal Brexit and we’ve also got contingency plans in place, including a government-procured ferry that’s on standby and of course the option, should it be needed, to use air freight too.”