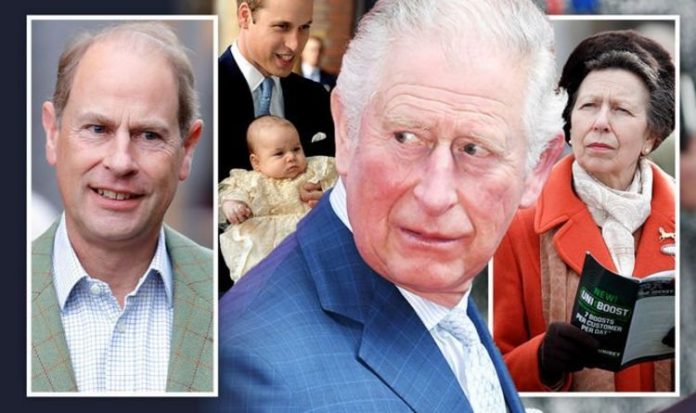 For Royal fans and watchers alike, it feels not long ago that Kate Middleton walked down the steps of St Mary’s Hospital in London and presented the world with her and Prince William’s first child and future King, Prince George. The young royal is now 7 years old, and has since had two siblings join him: Princess Charlotte, 5, and Prince Louis, 2. The trio will, in the future, spearhead the monarchy, with George front and centre.

Many claim it is for this reason that many members of the Royal Family outside William and Kate’s family hold grievances: that William’s immediate family look set to hold the crown for years to come.

Rumours of a feud appeared to be furthered on George’s christening in 2013.

It was at this event that only the Cambridge’s closest family members were invited, with other senior royals left off the bill.

It is true William and Kate have bucked royal tradition; they chose George’s place of christening as the Chapel Royal instead of Buckingham Palace, where the Duke and his father were christened.

Yet, such a bold move to not invite the likes of Prince Andrew, Princess Anne and Prince Edward were interpreted by many as signs relations were not as amicable as might be expected.

Publications like TheTalko have suggested this stems from a bitter rivalry between Prince Charles and his siblings.

JUST IN: Prince Charles in deprecating jab at William’s role: ‘They must’ve bee

“What he’s even more upset about is the slimming of the succession for the Crown.

“Prince Charles has eliminated his siblings from being next in line for the Crown.

“Now, the new rules make Prince Charles’ family the frontrunners when it comes to becoming King and Queen.”

Growing up, it said Charles experienced a far less “loving” relationship with his parents, Prince Philip and the Queen.

It said: “Charles was never really close to his parents while growing up,” going on to say that it wasn’t until after the Queen had given birth to Andrew and Edward that she “dedicated more time to caring for her family”.

It went on to claim Andrew was, in fact, the Queen’s favourite, while Philip got on most with Anne.

Charles and Andrew’s relationship continues to be rocky.

According to The Times, it was Charles who called his mother from his trip in New Zealand and advised her to strip Andrew of his duties after his “car-crash” interview with BBC Newsnight last year.

Charles has previously described his brother as being on the looser side of life.

ITV said the Prince of Wales once compared his brother to a bottle of fizzy drink “that has been shaken up and the top taken off”.