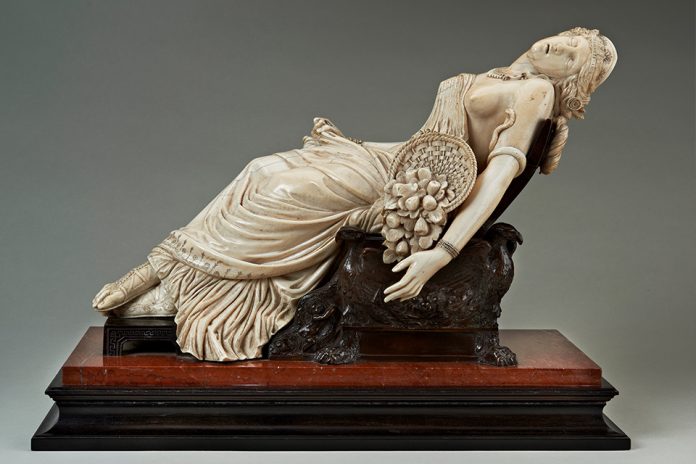 Henri de Triqueti was a notable and influential artist of the era who sought patronage among the royal family. His standing and knowledge earned him the respect of Prince Albert, and his greatest works include the marbles produced for the Albert Memorial Chapel.

The sculpture, valued at £150,000, was exquisitely carved, and is the best example of Triqueti’s investigation of the combination of ivory and bronze. It is at risk of being lost abroad unless a UK buyer can be found.

Henri de Triqueti is an artist of national significance – his Royal connections and influence on sculptors in Britain mean it would be a great shame to lose this exquisite sculpture abroad.

Whilst UK museums and galleries are currently facing many challenges, I hope one can come forward and save this piece for the British public to enjoy.

The Minister’s decision follows the advice of the Reviewing Committee on the Export of Works of Art and Objects of Cultural Interest (RCEWA). The committee noted that the sculpture was made for the British market, and is a superb illustration of Triqueti’s fluidity of forms, consideration of the female figure and distinctive eclecticism.

The sculpture is of outstanding aesthetic importance, with the Committee noting how the piece epitomizes the rich network of patronage between France and England following the exile of King Louis-Philippe’s court. The piece also exemplifies the Victorian taste for eclecticism and work in ivory, as well as the popularity of British collecting of French sculpture.

An important rediscovery, this striking sculpture by the “sculptor to the princes” Henri de Triqueti is a tour de force of carving in ivory and casting in bronze. Its imagery draws richly on the antique world and superbly explores the emerging interest in polychrome sculpture in Britain at the time. The eclectic style of Triqueti was appreciated by Queen Victoria and Prince Albert alongside many significant collectors in mid to late 19th century Britain but today very little of his work is known publicly and it is too little studied. The emergence of this work adds considerably to our knowledge of his art in the UK and his influence on later British sculptors and therefore its loss to the nation would be keenly felt.

The RCEWA made its recommendation on the grounds of the sculpture’s outstanding significance to the study of Triqueti, his work in ivory and the history of British art.

The decision on the export licence application for the sculpture will be deferred until 17 March 2021. This may be extended until 17 June 2021 if a serious intention to raise funds to purchase it is made at the recommended price of £150,000.

Under the Ivory Act 2018 the acquisition of ivory items by registered museums is exempt from the prohibition in the Act.

Details of the sculpture are as follows:

The Reviewing Committee on the Export of Works of Art and Objects of Cultural Interest is an independent body, serviced by The Arts Council, which advises the Secretary of State for Digital, Culture, Media and Sport on whether a cultural object, intended for export, is of national importance under specified criteria.

The Arts Council champions, develops and invests in artistic and cultural experiences that enrich people’s lives. It supports a range of activities across the arts, museums and libraries – from theatre to digital art, reading to dance, music to literature, and crafts to collections. www.artscouncil.org.uk.