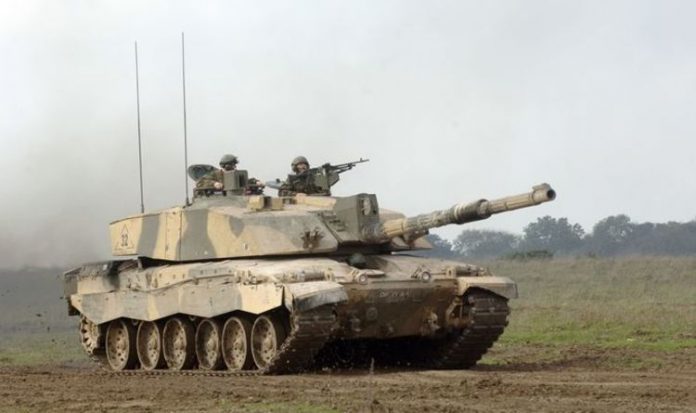 The move would see funds being diverted elsewhere, including aviation and cybersecurity. A government source told the Times “bold decisions” had to be made in order to “rebalance defence interests to meet the new threats we face.”

The paper claims a new plan would be to offer 50 of the UK’s Apache helicopters for use by allies.

Other proposals being discussed with the UK’s allies include investing more in electronic warfare and closing down an Army training base in Canada where heavy armour drills are carried out.

It is thought funding cuts related to the coronavirus pandemic are also factors.

One senior defence source has blasted the plans, saying the government was “dressing up financial pressures as capability choices.”

She was referring to the Challenger 2 battle tank and the Warrior vehicle.

Ms Mordaunt warned the UK “must be competitive”, but said Challenger 2 had not received a major upgrade in around 20 years.

He wrote: “If Britain is serious about deploying heavy armour it would need to upgrade its CR2s, and replace or upgrade its Warrior and AS-90 platforms.

“Moreover, it would likely need to forward-base these units in, say, Poland if they are to be closer to where they may see action.

“The problem is that doing these things is exceedingly expensive and would likely be undertaken at the expense of several army modernisation programmes, and the new Strike Brigade concept.

“There is also a severe risk that if the army fully upgrades its existing heavy armour at the expense of modernisation it would begin to fall behind emerging critical capabilities, from autonomous systems to long-range precision fires.”

And at a RUSI conference, General Sir Mark Carleton-Smith suggested “corrosive and intrusive effects” of cyber warfare and disinformation campaigns could be more of a key concern.

He said: “The main threat is less missiles and tanks. It’s the weaponisation of those elements of globalisation that hitherto have made us prosperous and secure, such as mobility of goods, people, data and ideas.”

Military news site DefenseNews reported last year the Ministry of Defence had set aside £18.4 billion for land-warfare equipment over 10 years.