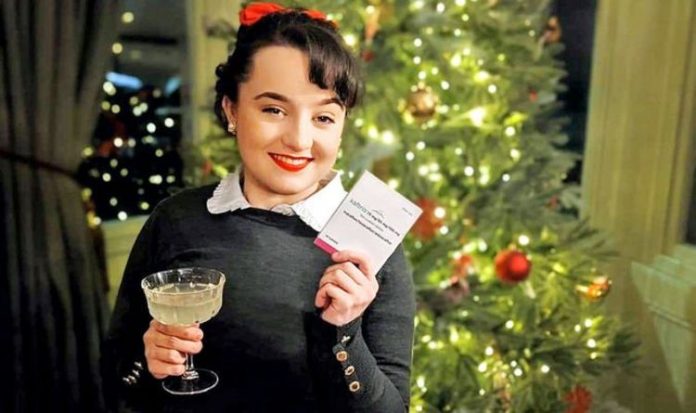 Last year the Daily Express started a campaign for the NHS to strike a deal with US firm Vertex for its incredible CF treatment. This summer we reported how all nations across the UK had agreed terms with Vertex, to the joy of Britain’s 10,500 sufferers. Now seven CFers have had their boxes of Kaftrio delivered just in time for Christmas.

Harriet was unable to do the simplest physical tasks without suffering violent coughing fits (Image: NC)

Delighted Harriet Burgin, 33, was unable to do the simplest physical tasks without suffering violent coughing fits.

The married surf-shop worker, of St Austell, Cornwall, had a lung function of just 33 percent before getting hold of Kaftrio last month. It has now soared to 49 percent.

She told us: “It is incredible. It had an instant effect on me. I feel like I have a future now.

“I used to daydream about things I could possibly do in the future but didn’t want to dwell on them too much, in case I couldn’t ever do them.

“Kaftrio is the greatest Christmas present I could ever wish for!”

Sophie was one of the first children in Scotland to receive the miracle drug (Image: NC)

Sophie White, 12, was ecstatic when doctors told her she was one of the first children in Scotland to receive Vertex’s wonder pill.

Her father Scott, a 42 year-old electrical contractor, from Ayr, told us: “Since she started she has a lung function of 114 percent! That’s crazy.

“All in all it’s been a life changing couple of weeks.”

Sophie said: “I feel my breathing has became much quieter and easier since taking Kaftrio.

“I have much more energy when I’m at dancing and doing PE.”

Holly says she has so much more energy than before (Image: NC)

Holly Trott, 25, says she hopes Kaftrio can realise her dreams of volunteering and “giving something back” to the NHS.

Since being on it for a few weeks Holly has felt like taking on the world and said it has inspired her to fulfil a life dream.

She told us: “I have always wanted to volunteer in the community, but I felt I couldn’t ever be safe to do it with my CF.

“Now with Kaftrio I feel more resilient and look forward to doing it in 2021. A payback for all the people who have helped me.”

Holly has so much more energy than before. She explained: “I can wake up and take a big deep breath. It may sound silly, but that’s a big thing when you’ve hardly ever done it.”

Elizabeth was 14 when she started to catch one lung infection after another (Image: NC)

Elizabeth Sheahan, 17, hopes the amazing drug will help her study to become a disability rights lawyer and fight for others.

The A-level student – whose twin William also has CF – was quite healthy growing up despite her genetic condition.

But when Elizabeth, of Hartley Wintney, Hants, was 14 she started to catch one lung infection after another. At one stage her lung function was as low as 60 percent. Now it’s soared to 114 percent.

She said: “I can breathe in without it hurting and getting a tight chest and I can walk for ages.”

Tommaso Kaso feels as energetic ‘as a gorilla’ since opening his box of the miracle drug (Image: NC)

Tommaso Kaso, 12, feels as energetic “as a gorilla” after cracking open his box of Kaftrio. His family moved to the UK when he was six as his health was declining rapidly back home in Italy.

Since he, father Genci, 52, and mother Valboma Kaso, 43, settled in Glasgow, they have seen his health boosted year-on-year.

Genci, a joiner, told the Daily Express: “We moved to Scotland as my wife has family here. Straight away the CF clinic changed his care and Tommaso started to improve.

“His lung function has slowly improved and he is breathing easier.”

Just before getting Kaftrio Tommaso’s lung function was 84 percent but in weeks it has rocketed to 92 percent. Genci added: “He told me, ‘Dad I feel like a gorilla – I feel so strong’.”

Hannah finally had her box of the wonder drug delivered – just in time for Christmas (Image: NC)

Hannah Gorbey, 13, has leapt her final hurdle just in time for Christmas – getting Kaftrio.

The showjumper lives in the Gower Peninsula, in South Wales. Parents Tony, 54, and Amanda, 51, hope all her ambitions will come true after she finally had her box of the drug delivered.

“We are looking forward to Hannah enjoying a more fulfilled healthier life.”

Hannah told us: “I can now look forward to travelling the world when I’m older. I’m so excited.”

Megan had a tough year shielding from Covid-19 (Image: UK)

And cheerleader Megan Errington, 17, had a tough year shielding from Covid-19 but it has ended it on a high after she started Kaftrio.

The England gold medal winner, 17, normally travels 230 miles to Coventry and back two days-a-week to train, but she has been forced to shield at home in Bolton.

After only four weeks of Kaftrio her lung function has soared from 90 percent to 115 percent.

Megan said: “I never thought I’d receive medication like Kaftrio in my lifetime.

“So far, this drug has been amazing and I cannot wait to see what the future holds for me.”