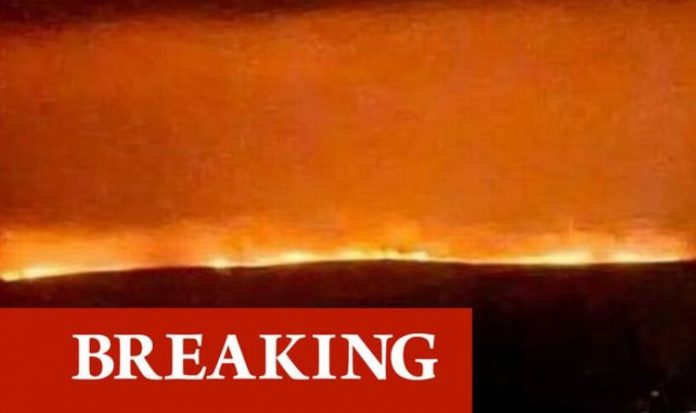 Devon and Somerset Fire and Rescue Service has said the blaze is near Tavy Cleave, a few miles northeast of Tavistock. The service has deployed five pumps and other units but has struggled to tackle the fire due to its location. Pictures on social media showed a large stretching blaze which has illuminated the night sky.

The fire is thought to be on a remote stretch of the moorland and no residents or animals have been injured, according to reports.

It is not yet clear if the fire is controlled, with images on social media showing a large section of the moorland ablaze.

Social media users said the blaze could be seen from parts of Cornwall, while others have estimated it could be stretching around three miles wide.

A spokesperson for Devon and Somerset Fire and Rescue Service said: “Our crews are currently at Peter Tavy but we haven’t actually accessed the fire yet.

“We have five pumps and various special appliances.”

The service warned people to “avoid the area”.

One resident told Plymouth Live “It’s still pretty bad up here, but the fire is on the other side of the ridge. The fire service cannot access it, they are just sat in a layby down the road.

“I’m sat on the top of the hill but fire appliances can’t get up to the fire because the roads are all frozen.

“It looks like they will just have to let it burn out; there is nothing they can do; they can’t fight it really as it’s difficult to fight something when you’re going into it rather than from the side or back of it.

“As far as I can see I cannot see any [fire] vehicles fighting [the blaze].

“I can see some little flames from where I am but it is mainly a big orange glow.”