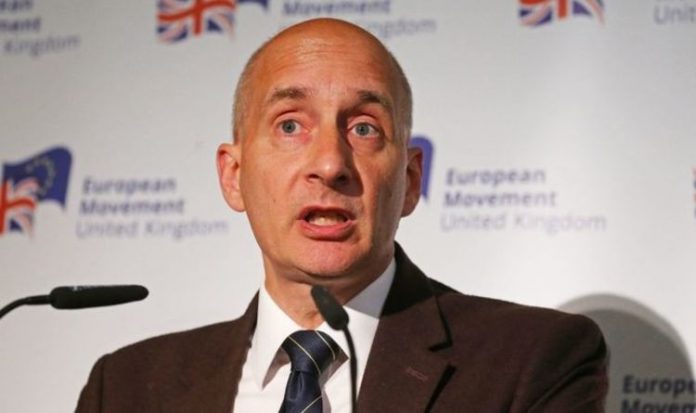 Lord Adonis has long criticised the UK’s departure from the bloc and has voiced his support for the fledgeling Rejoin campaign. In a social media post today, he said: “About to start a European Movement meeting on Britain after Brexit & COVID-19. “Enormous challenges but we will get through them and ultimately get Britain back into the European Union where we belong!”

Despite the UK having left the EU, four years after the referendum, Rejoiners such as Lord Adonis have begun pushing their campaigns to reverse the vote.

Although the two sides signed a landmark Brexit deal in December, Lord Adonis has claimed the UK’s best position would be to rejoin the EU.

Even on January 1, the Labour peer commented on a post from the European Movement where he claimed his desire to begin the pursuit to rejoin the EU.

His desire to rejoin the EU was also echoed by Labour MP for Canterbury Rosie Duffield, who stated the majority of her party are desperate to rejoin the bloc.

Although frontbench MPs voted in favour of the Government’s deal, she claimed many did so with a heavy heart.

She told the HuffPost UK last month: “Every day groups of Labour MPs and opposition MPs were meeting about People’s Vote and trying to take it to the absolute last minute, those people haven’t gone away.

“And most people on the frontbench who voted for this deal last week did it with a very heavy heart and they haven’t given up either.

Pointing to Scotland voting to remain part of the EU in 2016, Ms Sturgeon has expressed her desire to rejoin the bloc if she carries out a successful independence referendum this year.

In an Op-ed for German publications, she wrote: “We have been inside the European Union family of nations for nearly 50 years.

“We didn’t want to leave and we hope to join you again soon as an equal partner as we face the opportunities and challenges of the future together.”

The hope, however, was quickly shot down by Angela Markel’s administration.