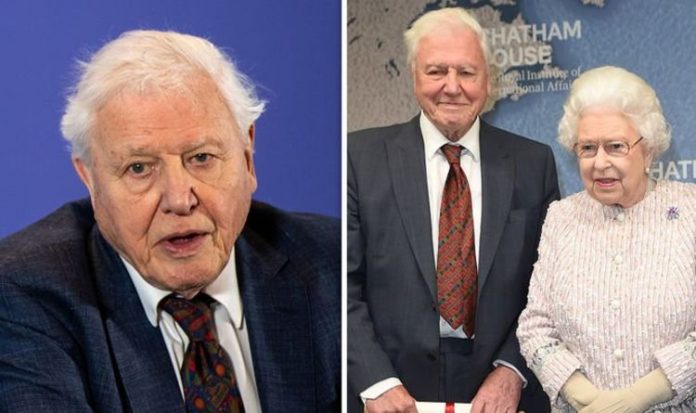 The legendary wildlife expert and environmental campaigner, 94, has recently been urging humanity to change its relationship with nature, admitting that he does not “have long left”. Sir David, who is the same age as the Queen, has produced and presented a vast number of programmes with the corporation since the Fifties. However, he once slammed former BBC director Richard Crawston over the making of a landmark royal documentary.

The documentary in question, entitled ‘The Royal Family’, was commissioned by Prince Philip in the Sixties, who agreed to open the doors of the Palace to let the public in on the magic.

It was one of the most intimate looks ever at the British Royal Family, but after it was shown just once, it was locked away in a vault, never to be seen again in its entirety.

Activities seen ranged from the Duke of Edinburgh grilling sausages at Balmoral Castle to the Queen making small talk with former US President Richard Nixon.

David Attenborough and the Queen are the same age (Image: GETTY)

According to the book ‘The Queen and Di: The Untold Story’, Sir David foresaw the potential problems with this and wrote to the BBC on the matter.

She claimed the broadcaster furiously wrote to the producer-director of the groundbreaking documentary in 1969.

He reportedly wrote: “You’re killing the monarchy, you know, with this film you’re making.

“The whole institution depends on a mystique and the tribal chief in his hut.

Ms Seward wrote: “It was a warning which was ignored and, in retrospect, the programme came to be seen to have given fateful encouragement to exactly the kind of intrusive interest in their lives which the Royal Family were at such pains to avoid.”

She added that the British monarchy had “never quite come to terms with the power of television or appreciate its need to reduce its subject matter to the level of a sound bite.”

In the 2018 Amazon Prime documentary ‘The Story of the Royals’’, experts claimed this documentary was to blame for the increased scrutiny of the royals from the press and public.

Sir David and the Queen at the Chatham House Prize 2019 (Image: GETTY)

Laura Mayhall, co-editor of Women’s Suffrage in the British Empire, said in the special: “I think the monarchy, in a very interesting way in the Sixties, tried to get out ahead of this notion that they were out of touch or they were unapproachable.”

She added: “It’s really a vehicle for us to see a little bit behind the scenes, so we can understand the monarchy as people like us.”

Despite the documentary being considered a public relations success, the Queen reportedly ordered it to be put away in a vault.

Robert Lacey, royal author and historical consultant on Netflix’s The Crown, said: “They realised that if they did something like that too often, they would cheapen themselves, letting the magic seep out.”

Perhaps the Queen changed her mind and came to agree with Sir David.

The broadcaster, who has become a national treasure, recently spoke about his latest project, Netflix’s ‘A Life On Our Planet’ on 60 Minutes.

He said: “Even the biggest and most awful things that humanity has done pale into insignificance when you think of what could be around the corner.

“There could be whole areas of the world where people can no longer live.

“The hottest temperatures ever have been recorded in Death Valley, yet were such optimists that we say, ‘Well, that’s interesting, isn’t it?’

“No, wait a few months, wait another year, and see it again.”

He lamented the loss of coral reefs, and expressed hope that the coronavirus pandemic has reignited people’s love for nature.

He urged: “By saving nature we are saving ourselves.”

‘The Queen and Di: The Untold Story’ was written by Ingrid Seward and published by HarperCollins in 2000. It is available here.