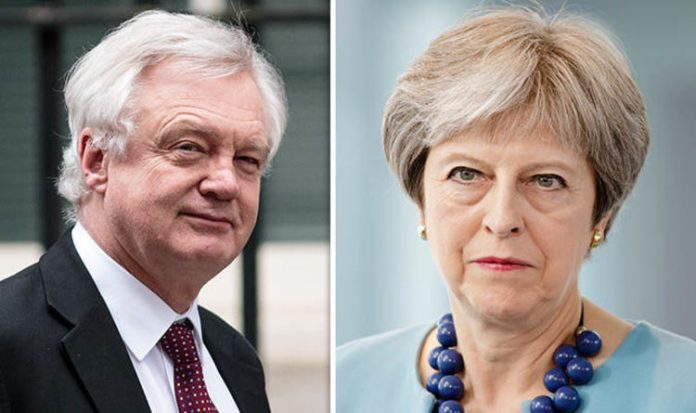 Wellingborough MP Peter Bone tweeted his support for the resignation, saying: “David Davis has done the right thing, a principled and brave decision.

“The Prime Minister’s proposals for a Brexit in name only are not acceptable.”

Andrea Jenkyns, who quit a junior government role earlier this year to “fight for Brexit”, added: “Fantastic news. Well done David Davis for having the principal and guts to resign.

“We need to make sure this is now a game changer for Brexit.”

Ms Jenkyns commented on his resignation, stating: “Another courageous and principled MP, Steve Baker, steps down too, amazing news.

“Now let’s get this party started and make Brexit happen.”

He said: “This is very important.

“It raises the most serious questions about the Prime Minister’s ideas.

“If the Brexit Secretary cannot support them they cannot be very good proposals.

“It was an attempt to bounce the Cabinet. It was a serious mistake.”

Conservative MP for Hazel Grove William Wragg, added: “I’ve reserved judgement on the Chequers’ Brexit plan, but I have grave misgivings about it and understand entirely why David Davis has found it necessary to resign.

“It was the right thing to do.”

Leave supporting MPs were understood to be highly angry at the Brexit negotiating stance agreed by the Cabinet at Chequers.

Mrs May indicated the Cabinet had agreed upon a collective position on its Brexit stance, and would seek a model similar to the single market for goods and the “facilitated customs arrangement”.

The Prime Minister commented on the resolutions on Friday, stating: “Today in detailed discussions the cabinet has agreed our collective position for the future of our negotiations with the EU.

“Our proposal will create a UK/EU free trade area which establishes a common rule book for industrial goods and agricultural products.

“This maintains high standards in these areas, but we will also ensure that no new changes in the future take place without the approval of our parliament.

“As a result, we avoid friction in terms of trade, which protects jobs and livelihoods, as well as meeting our commitments in Northern Ireland.”