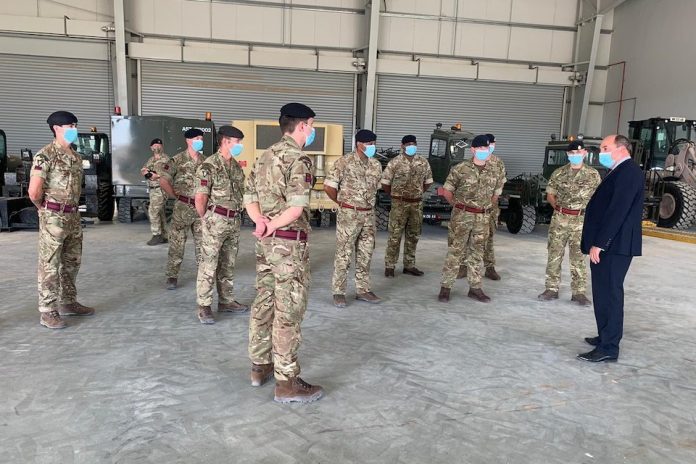 The Defence Secretary has announced a further £23.8 million investment in the UK logistics hub at Duqm port, as part of a visit to Oman and Qatar to discuss shared security challenges and future collaboration.

The investment in the Omani port will triple the size of the existing UK base and help facilitate Royal Navy deployments to the Indian Ocean. It also has a dry dock facility which could support the UK’s two aircraft carriers HMS Queen Elizabeth and HMS Prince of Wales.

The port was used in 2018 for Exercise Saif Sareea 3 and the expansion will further support British Army training in Oman.

On the Qatar leg of the visit the Defence Secretary offered support to the Football World Cup in 2022, with the UK ready to provide advice and guidance needed to deliver a safe and successful event.

The long standing friendships between the UK and the Gulf states are more important than ever. With shared defence and security interests, it is vital we work together for both regional and global stability. Our trade links are just as strong, too – from cotton to aerospace.

Whether tackling Daesh, or making our streets in the UK safer thanks to our intelligence networks, these are hugely valuable relationships that I am pleased to be able to renew this week.

The UK and many of the Gulf states work closely together on counter-terrorism, sharing information and resources to tackle violent extremism. Oman and Qatar and are all members of the Global Coalition against Daesh alongside the UK, where they work together to combat the violent ideology and network of terrorist fighters.

The Defence Secretary was able to see this first-hand when he visited the Combined Air Operations Centre in Qatar where strikes are coordinated from as part of Operation Shader, the name for the UK’s military contribution to the Global Coalition.

The importance of the Gulf region to global security was also demonstrated last year when the Royal Navy helped to protect freedom of navigation by escorting cargo vessels through the Straits of Hormuz, a vital shipping channel for international trading.

The details of two strikes by RAF Reaper unmanned aircraft against Daesh have also been released today by the Ministry of Defence that were co-ordinated by the RAF’s No.83 Expeditionary Air Group in Al Udeid, Qatar.