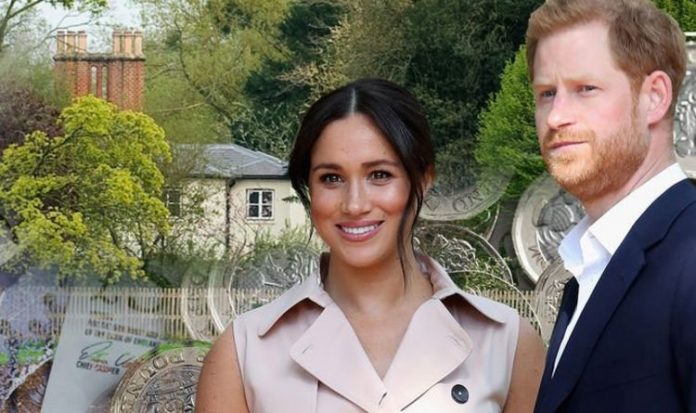 Earlier this year, the couple announced they will no longer be senior royals in a move which shocked the world. The couple are now living in Los Angeles with their son Archie.

Last week, Meghan and Harry signed a Netflix deal understood to be worth up to £75million over five years.

Announcing their deal, the couple said in a statement: “Through our work with diverse communities and their environments to shining a light on people and causes around the world, our focus will be on creating content that informs but also gives hope.”

The new deal has allowed the Duke and Duchess of Sussex to pay back the £2.4million of taxpayers’ money which was used to refurbish their royal residency, Frogmore Cottage.

Although no longer senior members of the Royal Family, Frogmore Cottage will remain their royal residency when the couple are in Britain.

Richard Fitzwilliams, a royal commentator, has said it is important for Harry, who spent his life as a British royal, to continue to have a base in Britain.

He told Express.co.uk: “It is important to remember Harry spent his life as a British royal and particularly for him, and for Archie, it’s very important to have the base in Britain.

“I don’t think anybody reasonably would expect them to give it up.

“It will be their base which they have now paid for, and that is how things will remain.

READ MORE: Meghan Markle and Prince Harry could use royal loophole to get £2.4M

The couple live in Los Angeles with their son (Image: Getty)

“Most certainly they should keep a royal base because they still have British patronages and members of the Royal Family, they’ve paid for all the refurbishment.”

Since the outbreak of coronavirus, the couple have been living in Los Angeles but Mr Fitzwilliams believes Harry would have returned to England had it not been for the virus.

He continued: “They are still members of the Royal Family and Harry is still sixth in line to the throne.

“But remember particularly they would most certainly keep it because it was the arrangement. This was a gift from the Queen.

DON’T MISS
Meghan and Harry will NEVER be free from scrutiny until this sacrifice [COMMENT]
Harry and Meghan use Netflix cash to pay for £2.4m Frogmore cottage [REVEAL]
Prince Harry ‘relieved’ to pay off Frogmore after Netflix deal  [INSIGHT]

“It’s important to remember, Harry would have returned to England had it not been for the pandemic, we know this.

“So, the idea that they are cutting all ties with Britain is actually incorrect, as long as they have paid back the public money, the £2.4million – there may be a little more in the 2019 accounts – but whatever money spent on it has been repaid in a lump sum, not in some instalments.

“They’ve got a huge deal with Netflix.”

The couple moved into Frogmore Cottage in 2018 (Image: Getty)

It is understood the pair had been relying on Harry’s father Prince Charles for funds after the pair quit as senior royal roles but reports say they are no longer receiving money from the Prince of Wales.

The Netflix deal will see the couple producing a range of programmes for the streaming service.

Last month, it was reported Meghan and Harry were setting their sights on a new TV show focusing on ‘normal’ people and was pitched to a number of executives.

A source said the show will focus on two causes close to Meghan’s heart; empowering women and tackling racial discrimination.

It was previously reported future works will include issues on climate change and mental health, a topic particularly close to Harry’s heart.

Since stepping down from the Royal Family, Meghan – who shot to fame on Suits – has lent her voice to the Disney+ documentary, Elephants.