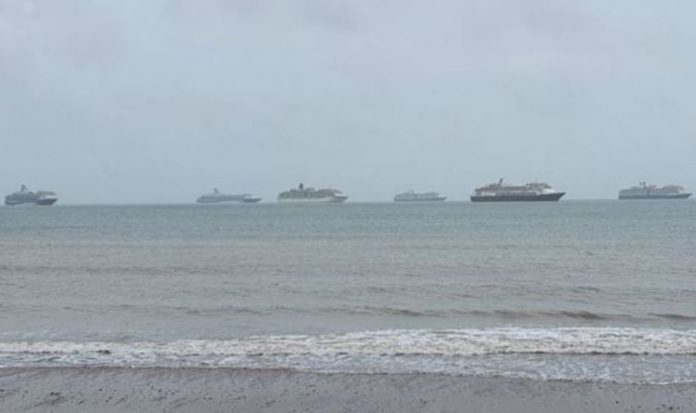 Currently, the Queen Victoria cruise ship, which is operated by the Cunard Line and is named after the famous British Monarch from the nineteenth century, is anchored around Hope’s Nose in Babbacombe Bay.

There have also been suggestions that Anthem of the Seas, which cost £1billion to build in 2015 and is one of the biggest cruise liners in the world, could be about to set off for Torbay over the coming days to undergo a routine hull inspection.

As of Wednesday morning, the massive vessels was seen off Poole in Dorset on the South Coast of England.

International travel, including that of sea travel, has come to a virtual standstill as coronavirus restrictions ban passengers from travelling around the world.

This has seen cruise lines across the world anchored in sheltered harbours, waiting for the go-ahead to once again start sailing to popular holiday destinations in the Caribbean and Mediterranean.

During the year-long Covid pandemic, Torbay and Babbacombe Bay on the South West coast have been popular locations for cruise ships to anchor.

This is predominantly because the waters surrounding the bays are sheltered from prevailing westerly winds.

The cruise ships have become a familiar part of the Devon landscape over recent weeks and months.

In 2016, the ship was thrust into the spotlight even before it was built when a poll to name it saw the public overwhelmingly deciding to name the vessel Boaty McBoatFace.

Royal Research Ship Sir David Attenborough is in the process of undergoing mariner training, testing and trials of the vessel’s technical, scientific and operational features and capabilities before it can set off on polar operation later this year.