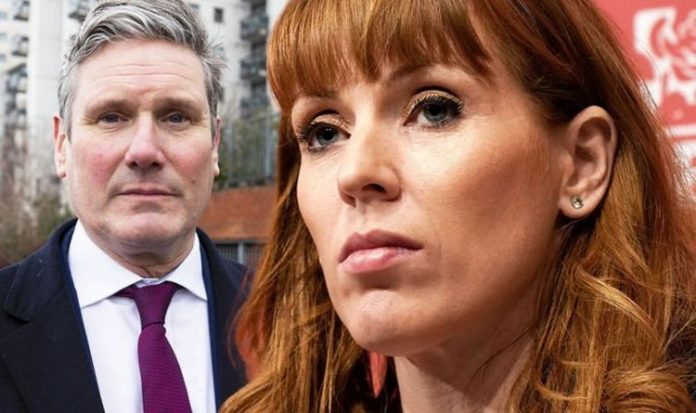 The Labour Party’s modern Left treats Britain’s working-class voters like “museum pieces”, Paul Embery, a leading trade unionist and Labour member told Express.co.uk. It comes as Labour’s leader, Sir Keir Starmer, this month hit a popularity slump after enjoying almost a year of rising ratings. Many have now questioned whether he is “political enough” to fulfil the role of opposition leader following a string of grillings by Prime Minister Boris Johnson during appearances at PMQs.

From November last year to the beginning of 2021, Labour and Sir Keir enjoyed positive figures in the polls, with voters suggesting they would elect a Labour government if a general election were held at that time.

Now, however, if an election were held tomorrow, 41 percent of people would vote Tory, while 37 percent would opt for Labour – a significant fall on the month before when 41 percent of voters said they would choose Sir Keir over Mr Johnson.

The Government’s successful mass vaccination programme has been largely credited with the slip, as the country reaches its most united point in years following the EU’s threatening Britain’s vaccine supplies and triggering Article 16 of the Brexit deal.

Sir Keir has spent almost a year attempting to reinvigorate Labour and shed the party of the radical Left-wing skin it took on under former leader Jeremy Corbyn.

In 2019, under Mr Corbyn and his socialist frontbench, Labour suffered its worst election defeat since 1935 as its so-called Red Wall – a band of working-class, north of England seats – fell to the Tories.

Mr Embery told Express.co.uk that there is “no route back to power for Labour that does not pass through those Red Wall seats”.

The party has taken this on board, with Sir Keir now having pledged to turn Labour into Britain’s “patriotic party”.

A leaked memo from an internal strategy presentation commissioned by the party this month stated that Labour must make “use of the [union] flag, veterans [and] dressing smartly” in order to win back disillusioned voters.

The Guardian, who saw the report, noted that it proved Labour was playing “identity politics”, with others arguing it exposes a veneer of naivety from the party about its traditional voter base.

It appeared to chime with Mr Embery’s view that Britain’s modern Left – Corbynite figures such as deputy leader Angela Rayner, Rebecca Long-Bailey and Mr Corbyn himself – view the country’s working-class as “museum pieces”, and are detached and removed from their daily lives and struggles.

Talking about last year’s US election, he told Express.co.uk: “There are definitely similarities between what’s happened in the US and Britain.

“The Democrats have followed a similar trajectory as the Labour Party in terms of embracing some of the stuff around identity politics and wokeness, and concentrating on the concerns of middle-class liberals and less on the concerns on the Rust Belt of America.

“That’s why Trump was able to win quite a large chunk of working-class support.

“There’s a culture war going on in America, there’s one going on in Britain, and it’s one where ordinary working-class voters feel that they’re treated as museum pieces in their own country, and that their views are unwelcome and are made to feel like bigots.

“So when someone comes along and says, ‘We speak for you, we’re on your side in this culture war’, then people are inclined to back that person.”

The top recommendations in the Labour memo include, “the use of the flag, veterans, dressing smartly at the war memorial etc give voters a sense of authentic values alignment.”

Jeremy Corbyn: The former leader led the party to its worst election defeat since 1935 in 2019 (Image: GETTY)

A senior party official told the publication that the language came from the brand agency Republic’s language rather than the party’s.

Yet, many party staffers have been left concerned.

One told the paper: “I was just sitting there replaying in my mind the storming of the Capitol [in Washington last month] and thinking: are you really so blind to what happens when you start pandering to the language and concerns of the right?”

Clive Lewis, a prominent Corbynite who dropped out of the party’s leadership race early on last year, and who served as a soldier in Afghanistan, said: “The Tory party has absorbed Ukip and now Labour appears to be absorbing the language and symbols of the Tory party.

“It’s not patriotism; it’s Fatherland-ism. There’s a better way to build social cohesion than moving down the track of the nativist right.”

Sir Keir’s effort to focus exclusively on British identity could perhaps be too little too late, according to Professor Robert Tombs, the renowned British historian.

He told Express.co.uk that Labour faced an impossible task as Mr Johnson’s approval ratings soared, and said: “Whether Labour wins back those Red Wall voters very largely depends on how successful the Johnson government is in keeping those voters.

Matt Hancock: Rayner has been called on to apologise to the health secretary over a claim on Twitter (Image: GETTY)

Meanwhile, Ms Rayner has been called on to apologise for an “untrue” claim about health secretary Matt Hancock.

She demanded Mr Hancock hand back donations amounting to £32,000 he received from the chair of the Institute of Economic Affairs (IEA).

The group recently published a report outlining that there was “nothing special” in the NHS’s performance in the coronavirus pandemic.

She tweeted: “I have written to Matt Hancock demanding that he repay the donations he has received from the chair of the IEA following their report disgracefully attacking the NHS and NHS staff saying that there is ‘no reason to be grateful’ for the NHS and NHS staff don’t deserve our thanks.”

He has since asked Ms Rayner to “publicly apologise” for the allegations.