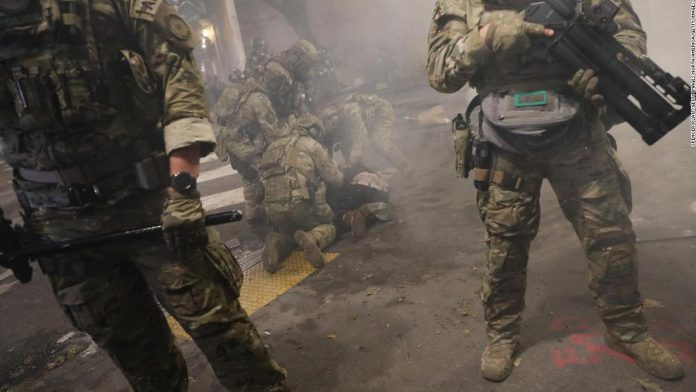 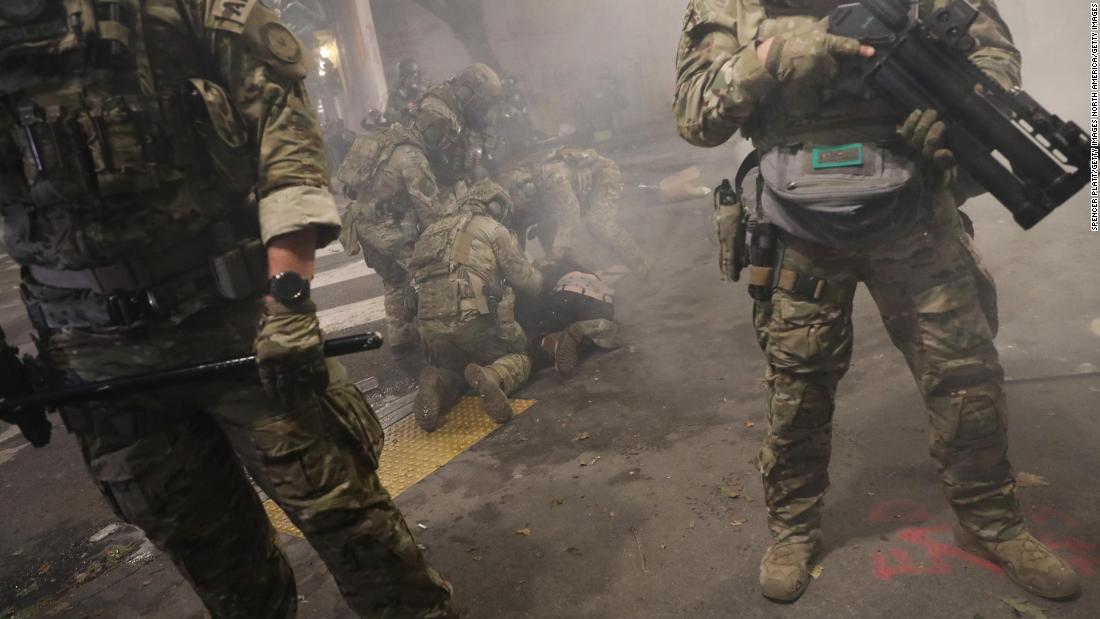 The Department of Homeland Security is moving “rapidly to replace” uniforms used by some of its federal law enforcement personnel after criticism over the military-style gear used by officers in Portland, Oregon, a senior department official said Tuesday.

Some Customs and Border Protection personnel, as well as Immigration and Customs Enforcement officers, have worn camouflage tactical uniforms while policing in Portland, according to DHS. Concern grew in recent weeks about the blurring of law enforcement and military personnel.

Top Pentagon officials have said they wanted this change.

Ken Cuccinelli, the senior official performing the duties of the Homeland Security deputy secretary, outlined the change in written testimony to the Senate Judiciary Committee.

“DHS law enforcement officers who interact with crowds are all identifiable both by their law enforcement agency and individually. They are in their respective uniform, with appropriate insignia — to include the words ‘POLICE’ as well identifying the agency for which they work,” Cuccinelli’s testimony stated. “The names of agents are no longer displayed, as they are the target of recent doxing incidents, which puts both them and their families in grave danger. To address concerns about military-like appearance of some of Customs Border Protection’s officers’ uniforms, which are the normal uniforms used by some CBP teams in the course of regular duty, we are moving rapidly to replace those uniforms for those personnel.”

CBP officers “came with what they had,” Cuccinelli added during the hearing, adding that “we have moved as quickly as we could to procure for them what you think of as the solid green CBP uniform.”

For more than two months, protesters took to the streets in Portland, following the police killing of George Floyd in Minneapolis. The protests in Portland escalated after the Trump administration sent federal agents into the city, ostensibly to protect federal property.

During the Senate hearing Tuesday, Republican and Democratic senators clashed over protests, underscoring the rift among the two parties about the situation that at times involved violent clashes between federal agents and protestors.

Cuccinelli defended the administration’s actions, repeatedly distinguishing between rioters and protestors. At one point he brought out a laser pointer to demonstrate the danger to officers’ eyes.

The events that unfolded in the city became a touchpoint in the debate over protests and who they’re composed of. The title of the hearing — “The Right of the People Peaceably to Assemble: Protecting Speech by Stopping Anarchist Violence” — set the tone.

Texas Sen. Ted Cruz, who chaired the subcommittee hearing, criticized the “leftist” and “anarchists” groups who he alleged exploited the cause.

“Americans rightly and peaceably assembled to demand justice,” the Republican senator said. “What began as legitimate protests against a vile act of abuse sadly were soon hijacked by opportunities and violent radicals.”

Critics argue, however, that the increased federal presence aggravated the situation on the ground in Portland, fueling protests that had largely been peaceful.

Hawaii Sen. Mazie Hirono denounced the title of the hearing. “The hearing we should be having is one called ‘the right of the people peaceably to assemble without being beaten up by unidentifiable federal agents. That would address an actual problem,” Hirono, a Democrat, said, following Cruz’s opening remarks.

The statements by both senators were indicative of the competing narratives and tensions that have arisen over the matter, with Portland serving as the epicenter.

Over the weekend, hundreds of people peacefully gathered at the federal courthouse — the epicenter of the previous clashes — for the 66th night of Black Lives Matter protests, according to the Portland Police Bureau.

On Sunday, Politico reported that Cuccinelli had signed off on limiting internal oversight into the products produced by DHS’ Office of Intelligence and Analysis.

In response to questioning from Connecticut Sen. Richard Blumenthal, Cuccinelli said he signed a memo that gave more authority to the under secretary of the intelligence office, removing the deputy secretary — himself — from the review process. In the past, the DHS Office of Civil Rights and Civil Liberties could appeal to the deputy secretary if there was a disagreement about whether an intelligence report was appropriate to be distributed.

“The purpose was to contain it all within the (Intelligence and Analysis) under secretariat and the belief at that time is that is an ordinarily Senate-confirmed position,” he said.

The Senate-confirmed Under Secretary David Glawe left office earlier this year, leaving an acting official in his place. That official, Brian Murphy, was recently reassigned.